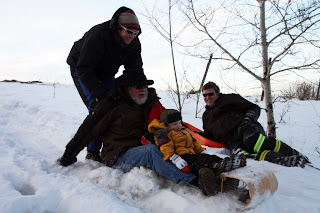 If you have just spent the last 38 days in -40 degree weather, huddling around hearths, ovens and coffee pots seeking any random warmth, you will have some small inkling of just how stoked I am to be heading to the islands in just 1 more day. Nelson, who never got the hang of keeping mittens on his feet in said 38 days, is also going to be thrilled to land in a new climate. Here are a few frigid images to show what I am leaving behind.  Yes, very nice images except for the fact that I nearly froze to death getting them. 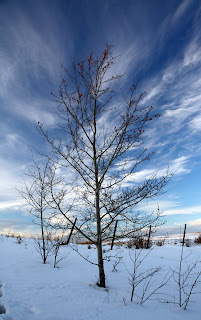 A frosty sunset and a snow angel in Cochrane. 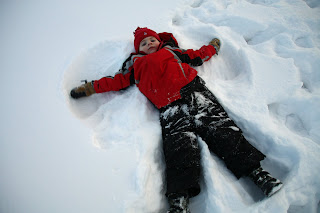 Now here is a photo from indoors, not cold at all, warming the cockles of my heart.  This is Baby Arnold that I am tearing myself away from.  My baby girl has a baby boy!  How surreal and miraculous. 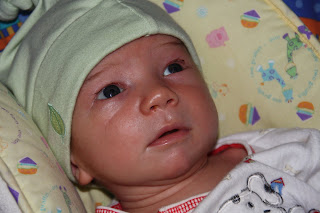 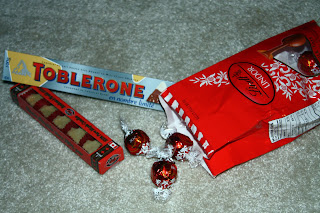 Finally, more things I'm planning on leaving behind...chocolate, cookies, sweets of any and every kind.  Every one of those 8 lost pounds found their way back onto my middle region.  Now that I won't be hiding my girth with coats, scarves, hats, mitts, boots and heating pads, I will need to deprive my cravings.  It's not going to be pretty when I squeeze myself into that bathing suit next week.

So, what do you think?  Have I improved?  How's the spelling (considering I haven't found the spellcheck icon yet)?  Are you impressed with the "inserted images"?  I was able to make a "comment" today...it seems to be working for me.  Give it a try and let me know you're out there in the nether world of techno-wizardry.  The only frosty thing about the next update will be the ice cubes in my glass of Crystal Lite.   Don't freeze during your New Year Celebrations.  I'll talk to you soon. Have a Happy and Safe Holiday.

We were escorted into the Grand Bahama Shipyard compound at dawn to board SuperServant4 from Dockwise Yatch Transports. We were told to inspect our hulls and then gather paperwork and keys from the controller. The day before, officials warned us to expect our diesle fuel tanks will have been pumped and even possibly our propane tanks removed before SS4 had left Newport. International law prevents the transit of combustible fluids. Groan. Another thousand dollars.

SS4 Crew told us the voyage from Rhode Island here had been in constant 45 knots of wind with waves of over 10 feet. I immediately decided it had been no great loss that I had not been allowed to travel south with Steadfast, despite my fervent and repeated pleas to do so. The SS4 crew had graciously hosed down the boats to remove most of the salt spray and black soot from their smoke stacks.

We had heard horror stories from cruisers using a different yacht transport company and were anxious to see how Steadfast had fared on her adventure. She seemeed unblemished, unscathed. My prophilactic waxing of the forward stainless had been a good idea, as superficial rust had set up everywhere. Oh happy day: our fuel tanks remained full, and our brand new/expensive propane tanks were still there and full!!!!

Leaving the harbour, actually right in the middle of the harbour as we cleared the stern of SS4, the radio came to life. A heavily-accented Bahamian voice accosted us, "Who are you? Where are you going? Don't you know to ask about ship traffic?" All this hubris in response to a humble request for "radio check". "yes, Sir. No, Sir. May we please proceed, Sir?" and we were off into the unprotected waters off shore.

The very first wave crashed over our nose, sending heavy sea over the fly bridge and into every exposed nook and cranny, including the leak around our newly installed Salon windows. Steep waves threw us towards the clouds and then crashed us down into the trenches. Ouch! 40 minutes later we crept into Bell Channel at Port Lucaya. Green around the gills and a little shaky, we took stock of our surroundings: clean, modern, friendly, beautiful pool, grounds, bar/restaurant, and gardens resplendent with flowers and bird song. Why are there no places like this in Nassau, at least that are not private and will let us in?

The 4 pm cocktail party was sponsored by the Bahamian Tourism Board. Crews from 8 off-loaded vessels, staff and crew from SS4, Dockwise bigwigs and ministry officials revelled in an open bar with hot and cold yummies until well after dark. Speeches, flowers, music and a few tears from the gentleman who was responsible for making the Bahamian Government change their minds to let this all happen in the first place. Tenaciously he had lobbied for over 2 years to overturn or waive the law that demands 6% import tax on all boats arriving here on a transport vessel.

Well, now we are up to date. Steadfast will get to enjoy the sun and warm weather here in Grand Bahama Yatch Club for the next many days, while captian and crew travel home to greet a new grandson and do the Christmas thing with family. Look for new blogs in late December after I have picked Samijo's brains about making my blog as pretty as her's is.
Posted by Unknown at 2:37 PM 2 comments:

Welcome to the Bahamas.

Flew in on West Jet's new direct flight from Toronto. Greeted by steel bands and friendly faces everywhere. New connections are a very big deal these days. Tourism is the only thing holding this country together right now, and that is by a ravelling thread as it is. The economic downturn has really hurt the Bahamas for the past 2 years and there is no relief in sight yet, they say.

The 34th anniversary of our Bahamian honeymoon was November 8th, and what better way to celebrate it than spend a week in Freeport, Grand Bahama? We took a suite at Pelican Bay Resort. Truly lovely. Now, between you and me, I am not 100% sure we would have had a whole week here just for our anniversary, because we are actually here to meet up with and retreive our boat from DockWise Transports. But we did have four whole days to play until the scheduled meeting...read: beach, pool, coconut rum.

Have you ever done the "Please-Let-Us-Tell-You-About-Our-Timeshare" thing? We never had, but the incentives were too good to pass up. 2 free bottles of rum, 4 tee shirts, and TWO DAYS OF FREE CAR USE. Boy, did we ever make use of that car...and we lived to tell about it. It's not every day I use round-abouts. One tends to get out of practice.

Next blog will tell all about Steadfast's crossing. Stay turned.
Posted by Unknown at 2:11 PM No comments:

After a one day delay, Dockwise Transports was ready for loading. Still windy and cold but winds were finally less than 20 knots. Super Servant 4 was our transport. She took on enough ballast to sink herself, filling her cargo hold bays to a depth of at least 8 feet. 49 yatchs, a record number for this crew, loaded one by one, sailing in under their own power, some stern in. SS4 crew fit us in together like a jig saw puzzle. The whole loading process started at dawn and continued to around 10am.

Once all the engines were stopped, 14 scuba divers went into the water aned proceeded to cradle the individual boats. They started with the ones with the deepest draft and then pumped out enough ballast so those already cradled would settle. Then they cradled the next deepest draft boats and then pumped out more ballast, and so on and so on, until all the boats were cradled and the transport bays were dry. Next, crew came in with welding torches and strapped each boat directly to the floor of SS4.

It was time to leave our yatchs. I had tried every which way to get them to allow us to travel south with our yacht, but the rules are the yacht has to be 90 feet or more and require systems maintenance enroute. Steadfast didn't qualify. Wearing my ear muffs, winter jacket, boots, gloves and scarf (such non-boating gear), I climbed across the boat between Steadfast and the center gangway (a one foot wide steel girder which divided the cargo bay of SS4 into 2 separate bays) and heaved myself up. I was carrying Nelson in one arm and a bag of "stuff" in the other. How was I going to make it, a distance of about 400 feet, balancing on the narrow walkway, climbing over and around criss-crossing lines, straps and cleats? Nelson was wondering the same thing and began to tremble and squirm.

So...I put Nelson down...and then I even let go of his leash. It was time for each one to fend for him and herself. He only looked back at me once and then with great determination/doggedly he made his way forward to safety and the waiting arms of the crew. They scooped him up and cheered him in Ukranian. Nelson took it as his due and proudly informed them that his full name is Admiral Lord Nelson Grisly Nick. I was proud of him for doing so well, but I sincerely doubt he would do it again of his own free will.

Good bye to Rhode Island, our cruising waters for the past 4 years. We will never forget you and do promise to visit our dear friends as we pass through from now on.
Posted by Unknown at 11:58 AM 1 comment: