Autumn in My Neighbourhood

On my wedding day 35 years ago (November the 8th), it was 75 degrees.  Two weeks later, at my brother's wedding, there was a raging blizzard and 2 feet of snow on the ground. 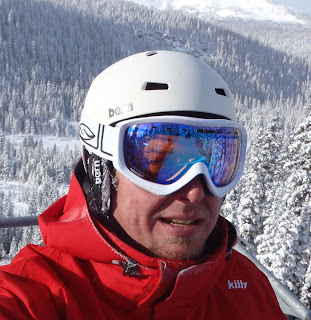 While parts of my family in western Canada are already in the grips of winter,
here it is the middle of November and we still have autumn where I live.  Temperatures are hovering around 45 to 55 during the afternoons, lots of rain and fog, with the occasional sunny day thrown in for good measure.  If I have to be stuck ashore this season, I am not complaining.

Nelson and I frequent the local beach.  At this time of year, we only have the birds for company and the pup gets to run off-lead with impunity.  You know what they say, "A tired dog is a good dog."

I don't know which of us will be more surprised if he ever managed to catch one of these birds.  At least he gets his exercise trying.
The ducks have taken over the marina.  Only the die-hard sailors (3) still have their boats in the water.  They are probably in denial, trying to convince themselves the mild weather will last indefinitely and they will get out to play in the waves one more time. 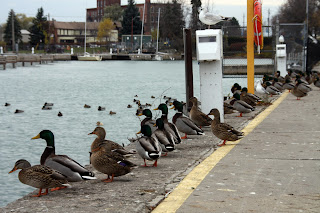 Although most of the trees are nearly bare... 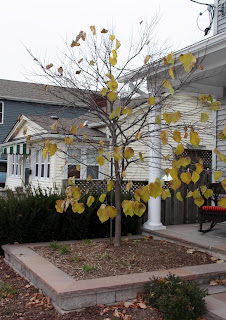 many are tenaciously hanging onto their fall splendor. 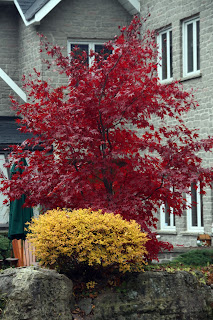 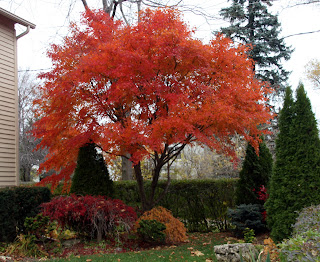 After a good trek around the neighbourhood, we come home to check the progress at the mega-mansion next door. 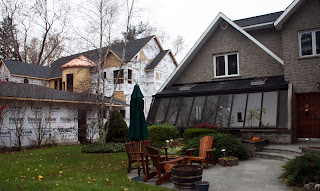 Yup.  It hasn't shrunk any.  As big as ever.  I'm liking the copper dome and fancy doo dads on the peaks.  Inside our house, things are still in shambles.  I have been waiting to post things in order from beginning to end, the before and after shots.  More dramatic that way.  I need lots of drama in my life--don't we all?  If there were no drama, there'd be nothing to blog about.  :)
What's up in your neighbourhood these days?  Do you have snow yet, or are you living in the opposite hemisphere, like Veronica, heading to the beach for summer vacation?  Either way, keep warm and enjoy the change of season.

We feel like we are in the dead of winter. Of course, here that means the temp. actually got down into the 50's...
Very nice photos!

It's amazing what a hugh difference in weather there can be in only 2 weeks! I've been in weddings in March... through a blizard! & Weddings in January where we could have 'grilled out'. :-)

From the pics and description it looks like you live in pleasantville – minus the sogginess and fog. Sailing in November? Gotta try that.

Yesterday was a lovely 64. Today a blustery 49. My neighbor still has his boat tied up to the bouy in front of the house. It won't be long until we have ice on the beach. brrrr

We're raking as fast as the rain will allow. We don't get snow but we have some torrential rains once in awhile that threaten to flood us but I'm confident I would make a good raft, haha. Hope you have a wonderful Thanksgiving lovely lady!

I get depressed during Winter although I've only experienced it 3 times in 3 different countries. I've yet to experience a Canadian Winter!!

Thanks for the mention and always leaving kind comments on my blog. Love ya, sweet,sweet lady!