It has been almost three years since we last enjoyed each other's company.  Old friends moved from Our Town to the other side of the country 17 years ago and opportunities to visit have been few and far between.  When Joe celebrated his 60th birthday, we went west.  This occasion called them east.  Oh joy!
A pancake breakfast in one house, a tea party in another.  A late afternoon catch-up in a local pub, a surprise birthday party at the Dad's place.  Everyone was wanting a piece of them and we all had to share.
As there is no operating kitchen in this house at present, we proposed dinner out for our allotted time.
- A table for five, please.
The wine was generously poured and we raise our glasses in salute to one another.
-Wait.  I didn't touch glasses with you.
-Not necessary, he said.  The new buisness etiquette dictates one need only raise his glass, not touch all those around the table.  It's the new way.
Hmmm....  Old habits die hard, and so we smiled at one another as we clinked our glasses together, leaving no one out. 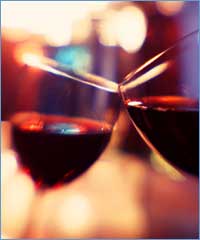 -Do you know why it became customary to "cheer" each other this way, one asked?
-Tell us, we all chorused.
-In the Dark Ages and on into the Middle Ages, intrigue and villainous plots to overtake one's enemies were rife.  One had to be constantly on one's guard.  It clamed fears of poisoning when cups not only touched, but tipped some wine from one cup to another around the table before anyone risked taking the first sip.
-In a similar vein, people began shaking hands with their right, dominant, sword arm to show they were unarmed and not a threat.  It usually worked, unless you had a left-handed enemy.  Ha ha.
Don't you find it interesting that so many habits, customs and traditions are routinely carried on without a second thought?  Now considered "good manners", they originated as survival techniques when civilized society was just emerging, contentious people, clans, tribes and nations all seeking to gain power at another's expense.
-Cheers!  I am your friend, not an enemy.  Let's shake on it.

Why is it that everyone wants to sweep all the old things away? Why is an old practice a bad practice? To me, clinking each person's glass is like shaking their hand!
here's to you my friend!

I never knew that --about the toasting. And I bet I'll sound impressive when sharing it! I wonder if they're changing it because of sharing germs...you know, like people not wanting to shake hands or hug anymore? If we didn't hug in this family people would think something dreadful was wrong with us! Have a great weekend!!!

That toasting bit is interesting. Toasting always feels like a warm, friendly gesture. Even makes a glass of wine taste better Ha. You have a great blog and that sea craft is a beauty.

Thanks for sharing the history behind some of our modern day customs :-)

As long as all are in reach I think we should make the effort to touch glasses. Raising is great when there are about 15 at the table though. What a fantastic boat you have there, and I would love to know the doggie's name! He is a cutie. And oh... do you got the right idea about chillin!!

I love history like that. Amazing. Thanks for sharing this special moment with me.