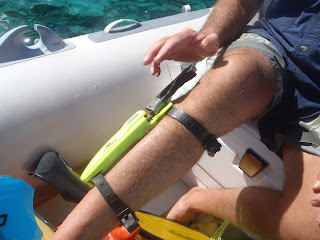 With East winds and an ebbing tide, our snorkeling expedition to Rocky Dundas in the Exuma Land and Sea Park was a bit of a challenge. It was really “rocky” and rolly too, but we lived to tell the tale, and had a good time doing it. We managed to get a couple of not too blurry pictures that will give you the idea of what we saw. This cave is open on one side at low tide, and has lots of stalagmites and funny coloured coral formations. 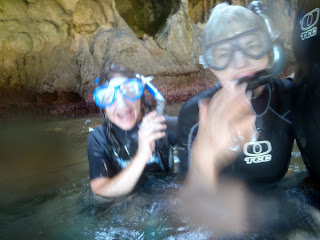 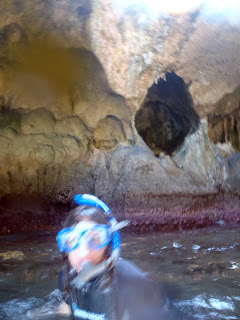 After fighting our way against the current, back to the dingy, we ventured further. We wanted to see a sunken wreck by the old Decca Station from WWII on the west side of Pipe Cay.
This is the infamous site of Gary O’s walking on water. (Amazing what the human body is capable of when faced with imminent death by shark attack…or perceived imminent death…or imagined shark attack…or a grey, cloudy shape in the water.) 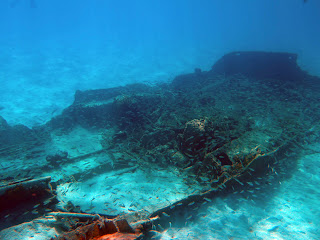 Enroute, we hit the flats and had to do the "African Queen" thing...note the big toe of the Big Cheese riding in the dingy, being pulled by slaves into deeper water. 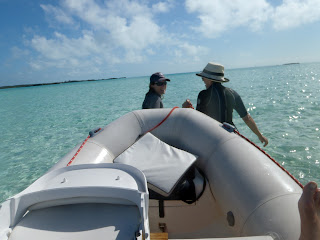 Back at the Compass Cay marina, we got some great shots of a queen trigger fish off the back of the boat  and Tucker Rolle's pet sharks too. 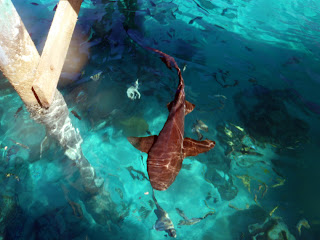 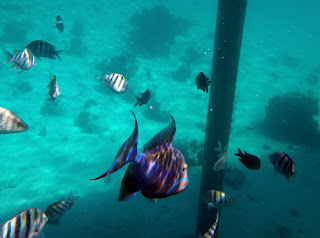 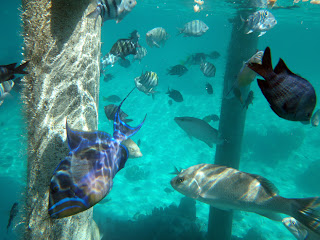 Heather couldn’t believe the size of the star fish we found. It didn’t take much to convince her that they do not bite, sting or pinch, and are safe to touch. She was very careful to put it back, right side up when the photo shoot was over. 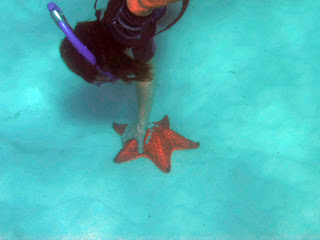 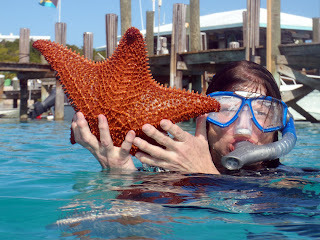 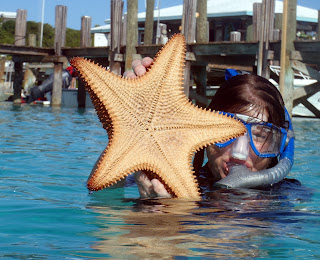 Fishing has been fun as always, but not always with the best results. Only the die-hard Bahamians (with the emphasis on “die-hard of ciguatera”) eat Barracuda. We throw ours back when we are fortunate enough to get away with all fingers intact. 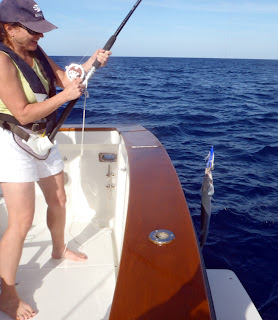 Sundowners at Compass is a delightful time of camaraderie at the main dock. It’s potluck hors d’oeuvres, introductions , re-connections and story time. 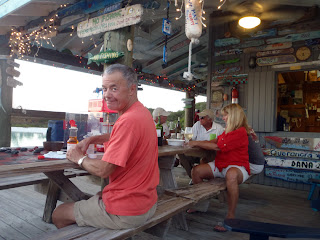 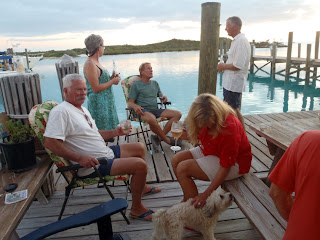 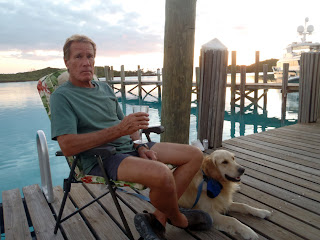 This one's for you,  Denno.
Heather's visit is almost over.  Too soon.  We are so happy to have had this opportunity to share our favourite people and places with her. 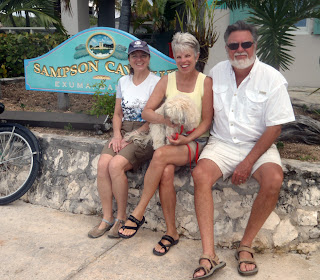 OMG!! That starfish is huge!!! I held one before when we were snorkelling in the Philippines but it wasn't even close to this big!!

Stopping by to visit your blog is always so exciting!! Love the pics.

Outstanding. You have convinced us. Our next cruise will be the Eastern Caribbean.

We already have this year's vacation planned but hopefully next year we can snorkel in the clear water. Thanks.

What lovely amazing photos. Sooo cool. My favorite places are anywhere with my favorite people which are my family members.

thanks for the fantastic photo tour! Great photos and narrative. I'm glad you are having a great time...

GORGEOUS photos. Geez, everytime I pop over here to your blog I am DYING inside for the beach!!! Oh, I miss summer:) You must love living in the Bahamas. SO FUN!

Oh my gosh! I so want to be there now. And that Starfish! Wow.