We saw two of them lurking in the shallows. With no known predators, viruses or diseases to which they are susceptible, these two reef menaces lazily spread their venomous fins and spines, gobbling up baby fish by the dozens. If left unchecked, they quickly reproduce, devour their way through the ready supply of food and move on, wrecking havoc one reef at a time. Meet the poisonous Lion Fish.
Native to the South Pacific, it is unknown how or when they came to live in the Atlantic and Caribbean
Seas. Researchers and marine biologists are scrambling to find out how to control the devastation caused by these alien intruders. Nassau bureaucrats designated a bounty and open hunting season a couple of years ago. Many thousands were “bagged”, but the plague goes on unchecked.
Those in the food industry have done their part, touting the flesh of Lion Fish as incredibly tender and delicious, but few divers want to get close enough to the poisonous spines to clean and fillet them. Once they are speared, these fish need to be disposed of very carefully or a world of pain awaits an unsuspecting handler.
Steadfast Captain, Crew and Guests have been on the lookout for sightings, and low and behold, we found two, right here in Compass Cay Marina. Number One Guest garnered permission to spear-fish them, contravening the “no fishing in the marina” rules. Success! 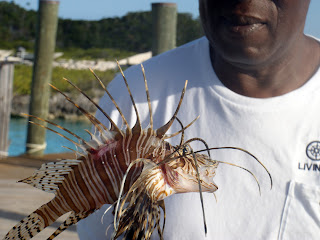 One down, one bigger one to go.
Ah ha! It seems these Lions are quick on the uptake.
-Divers, dead buddy, danger!
Bigger Mr. Lion Fish has been in hiding ever since and despite daily forays into his territory, the hunters have come away with empty spears.
The hunt has become obsessive. Who will win this contest--the Hunter or the Hunted? Surly the human brain can outwit the fishy thought process and prove victorious. Let’s all think like a fish-in-hiding and figure out the next move. Awaiting your input, we remain,
Lion Hunters On Safari!

I had no idea they were over there. In the pacific I always heard them called "turkey fish" or "scorpion fish." Either way, not a good thing. We're going to Hawaii in a couple of months, so I'm sure I'll see them again!

OMG..... How'd you like to step on one of those in the water. Oucheeee. Of course you can tell that I've never heard of them but they do look deadly. Good post.
Love and peace.

Wow - scary- but it is kind of pretty and exotic..

Wow! Incredible photo. Thanks for sharing it with us so I could show it to babe. She loved looking at it.

Sorry, I'm rooting for the fish!

It's really a pretty fish as far as the general looks of them.