The penultimate shopping extravaganza ended in tears:  mine, not the bride's.
Out the door and away at the crack of dawn, we sallied forth, seeking adventure and at least one dress.  Our spirits were high despite the ominous clouds threatening heavy weather to come and the hour long drive to get us there.  Adventure found us sooner than we expected.  Wow!  the passenger-side windshield wiper went West without us. 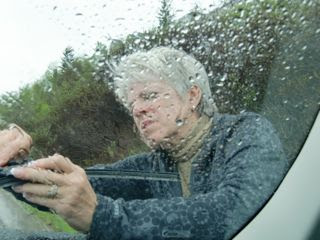 Pulled over on the side of the 6 lane highway, we studied the enclosed instructions for installing the new one Bridie-Dear had on hand.  Wonders never cease.  Next step was to stand in the gutter over-flowing with run off and the fattest, longest, most disgusting worms I've ever seen, lean against the wet car and fiddle with the thing until it snapped in place.  Success.  Now we were proud of ourselves and ready for more.
We hit the Mall a mere 20 minutes after they opened the doors.  Being a holiday weekend, the weather forcing people indoors, and 250 stores to filter, we joined the hoards, the milling throngs of those worshipping in the
Temple of Want.
Now this was serious shopping!
In almost the very first store, we found a treasure-trove of fabulous gowns and dresses.
Encouraging.
Hopeful.
All smiles.
Yes!  A decision.
After lunch and debriefing, we bought the dress, we bought the shoes, we bought the accessories and a hundred and one other essentials.
Achievement and happiness spread grins across our weary faces.
Back in the Trans Canada Highway rush-hour, in pouring rain and encroaching fog, we were 96 km. from home when we got a flat tire.
What?  No spare??????? 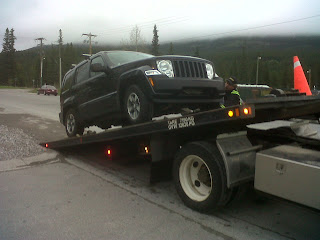 It wasn't until Bridie-dearest had departed in the taxi with the car keys (or at least, I thought she had) that I decided it was time to lessen the load behind my brimming eyes.  Yes, we had accomplished an amazing amount in two weeks time, and yes, the Bride was ecstatic,
but I was:
Hungry:  do pizza deliveries come to the side of highways?
Tired:  my feet hurt and I wanted my bed?
Needed to pee:  where's a porta-pottie when you need one?
Wanted to go home:  not just in Alberta, but all the way home to where Hubby is.
Please, now?  Sniffle, sob.
This is where I fade out to the strains of "Don't Cry For Me, Argentina" playing in the background.
Being Mother-of-the-Bride has it's dark moments.
Posted by Unknown at 1:11 PM

Oh geez! Why didn't you call us? We were at home, dry and would have come and got you!

Oh well, at least the dress was chosen...

What a day! I'm glad you found a dress and evidently you did make it to home, in some form, eventually. There are just some days they don't warn you about in the Mother's Handbook.

But I'm curious....you had a spare windshield wiper but not a spare tire??

Oh! Don't tell me this. I'll cry for you Argentina, because that will be me soon. So far my daughter (the bride-to-be) can't even decide on which stores to visit to find a dress. She seems to be frozen and can't make decisions. She was the same way when we sent her off to college. I don't think this bodes well. Too bad because I really like that kid and I have a feeling this mother/daughter bonding thing may not be as fun as it looks in the movies. Congrats to you guys for finding the perfect dress and accessories and except for car troubles and extreme fatigue it looks like you still like each other. Maybe there is hope for me.

So glad you found a dress! That was some day!

What a day! Full of accomplishment and frustration...
It will be a great family story though!