Our baby has been put to bed.  Crossing of the Gulf Stream went smoothly enough (read:  nobody got sick).  We arrived safe and sound in Stuart, Florida from Lucaya after 7 hours of clear skies and moderate winds.  Once we had cleared customs and immigration, got a new Foreign Flagged Vessel cruising permit, said goodbye to Captain Bill and Joan, we moved her to River Forest Marina/Storage Facility.  There she will be cared for in climate controlled comfort through the summer and hurricane season, until we are ready to do it all again.
For those who have never seen this process, and for those who can't get enough (me, mine and ours), I am posting the photos of the hauling process.
Steadfast approaches the 50 ton lift. 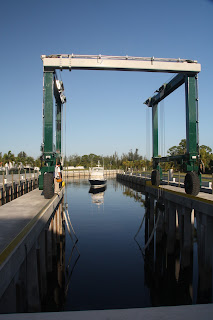 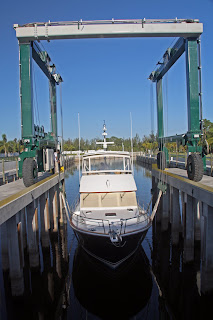 George, the man of the hour! 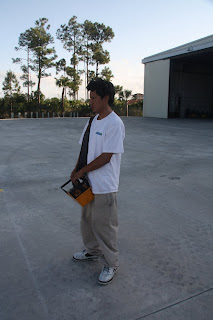 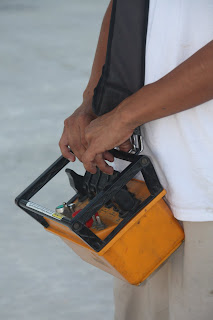 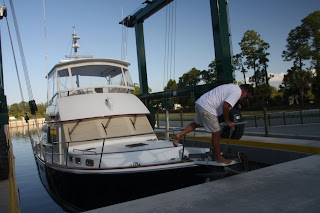 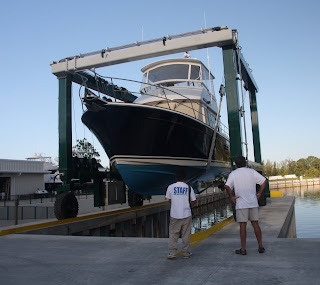 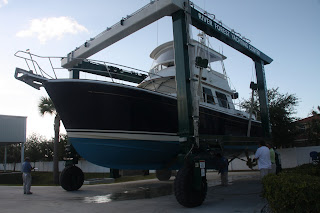 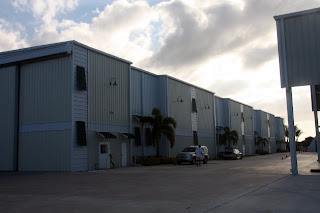 If you click to enlarge this picture, you will notice the shutters/awnings and fake windows.  These endeavour to mask the nature of the building, as it is surrounded by residencial neighbourhoods.  Although the words "hurricane-proof" seem an oxymoron, this new facility was designed and built to withstand sustained winds of 140 miles per hour.  After what we saw around the country last week, one wonders if anything can withstand the forces of Mother Nature when she has a mind to blow.
So now the Captain and Crew of M/V Steadfast are boatless for the summer.  Does anybody have a 20 foot, center console runabout for sale?  I want to go fishing.

I'm glad you and your boat are all tucked up for the summer but, I have to admit I will miss all your adventures. Seems you had quite a few this winter! Keep safe and although I don't have a runabout you can come to the beach. I have an awesome surf board or two around here!

Awesome!!! I've always wondered how the hauling process is done.

I shall miss all your wonderful adventures but glad that you're back safe and sound.

So glad you had a wonderful winter and easy crossing!

How nice that you can store your boat indoors. That really keeps it nice, I'm sure...
We are on our way to Hawaii on Monday. I wish we had our own boat to get there...
I'm happy that your long adventure went well!