The tradition of the wedding cake began way, way back in the time of the Romans.  The "cake" was a loaf of bread which the groom broke over the bride's head (did he whack her with it?) to symbolize his dominance in the marriage.  Later, during the 1700's in France, the "cake" became a stack of sweet rolls piled high between the bride and groom who tried to kiss each other over the top without knocking any of them down.  Later still in England, the cake served either after the wedding feast, or for the wedding breakfast, became a dense fruit cake.  By the early 1900's, brides were keeping the top layer of their wedding cakes to celebrate at the birth of their first child.  They say the "cutting of the cake ceremony" where the bride and groom hold the knife together to make the first cut, is symbolic of their first joint task in marriage.
This blogger's family tradition goes back five generations.  It is fruit cake, made by mother, stirred by friends and family, dowsed with rum repeatedly for months before the date of the wedding, decorated with marzipan and royal fondant icing just days before the Big Day, topped with something of the bride's choice and savoured by any lucky enough to get a taste!
To see the post when we made the cake, go here.
Here are a couple of shots of the cake at the wedding and at the wedding breakfast for your viewing pleasure.  You will just have to take my word for it that it was melt-in-your-mouth delicious, and that even non-fruit-cake-lovers smacked their lips in delight as they down dainty morsels. 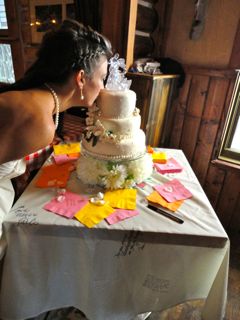 We asked guests to autograph the table cloth instead of writing in a book at the reception.  A keepsake/momento for the bride. 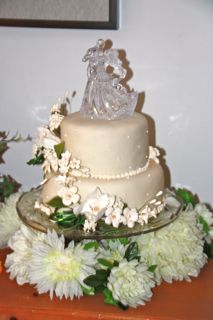 This is the cake at the wedding breakfast...what was left after the reception.  Still beautiful and still delicious.  The top is securely stored away, air tight, for next year's anniversary.
Some people believe that if a "sweet-young-thing" sleeps with a wrapped-up slice of wedding cake under her pillow, she will dream of the man she will marry.  What are your family traditions regarding wedding cakes?

PS.  Just to remind you that if you haven’t signed up for Carol’s on-line launch party at www.facing50withhumour.blogspot.com on the 16th September then do so straight away. She’ll be hosting giveaways and prizes all day. There will even be the chance to win a Kindle. It should be a lot of fun with competitions, laughs, extracts from her hilarious novel, guests to check out, new people to meet and I even heard on the grape vine that she will actually be appearing on a video link!
Posted by Unknown at 3:13 PM

That looks great and I love the story behind it. Great family tradition.

Oh wow! The cake looks amazing. I was very interested in the history of the cake because I've been to a few weddings in France with those profiterole type cakes and never understood why they didn't have a 'proper' cake.
Many thanks for the shout out. Don't forget to visit tomorrow and bring your smelling salts! The contestants are awesome :)
Carol

The cake is gorgeous! What a beautiful tradition! Love it!

I like the valuable info you provide in your articles. I’ll bookmark your weblog and check again here regularly. I’m quite certain I will learn plenty of new stuff right here! Best of luck for the next!

I can't think of a single wedding tradition in my family. Convention is not our strong suite!