Chuck and Joan went fishing.  They reeled in two half-drown men.  There is a story here somewhere. 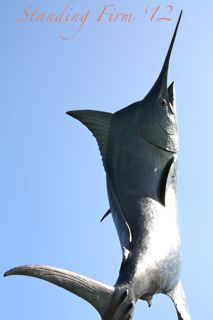 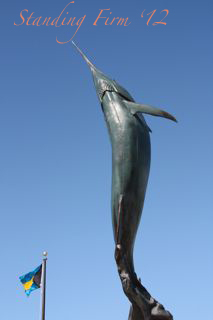 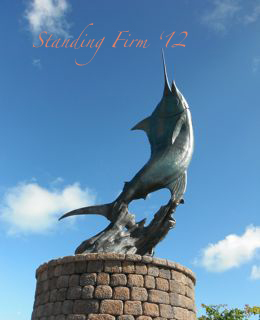 The skies were clear, the seas were calm and the wind was less than 15 knots.  The down riggers were deployed, five lines off the stern were loaded “way out there”.  It was looking good for a day of fishing The Pocket off Chubb Cay.  The drop-off from 150 to 5000 feet makes for great fishing opportunities as big fish chase smaller fish to shallow waters at the change of tide.

Guests and crew of the 70’ Viking were hoping for Blue Marlin, a 100-pound Wahoo or two and maybe a Tuna.  Sunscreen, hats and visors emblazoned with the boat name, polarized RayBans, long-sleeved Columbia SPF 50 shirts and Sperry Deck Shoes completed the prerequisite fishing attire.  Chuck cracked open his first brewski of the day and Joan settled in with her current good read.  Fishing is all about being ready for the action, waiting for the action, and not dying of boredom until the action begins.  Leaving boat handling to the captain, Chuck and Joan were free to entertain themselves while the boat trolled up and down the edge-of-the-ledge waiting for a strike.

-Wait a minute, what’s that off portside?  Get the binoculars!

Cutting the engines to idle speed, the captain sounded the alert:
-Men in the water!  All hands to!

The action had begun.  Every available hand was put to reeling in lines.  Seven individual reels had to be cranked to bring in the tackle before a rescue could be attempted.  While guests did the reeling, captain and crew deployed the AR15, just on the off chance…, radioed position and circumstance to alert the coast guard and cautioned those aboard:
-We don’t know who these men are or why they are in the water.  Be prepared for trouble—it could be anything.

The decks now cleared of obstacles and fishing gear, the Viking cautiously approached the men overboard.  They were clinging to plastic-wrapped floating bundles of “something”.  Their go-fast vessel was capsized and partially sunk, drifting with the current, most likely loaded with LOTS MORE of what was keeping them afloat.

Chuck and Joan had fleeting thoughts of pirates, drug-lords, mafia revenge.  Was this a ploy to grab their vessel?  Could they end up in the water as these two (and who knew who else?) traded places with them?  Did they have guns???

Terror filled the eyes of two men in the water, surrounded by certain death.
-SHARKS!  SHARKS!  GET US OUT, MON!!!  HURRY YOU UP NOW.

-Joan, go below and lock the door, the captain ordered.  She didn’t wait for an engraved invitation.

Letting go of their bundles, the near-drowned men reached for the life rings thrown towards them.  One after the other, they were dragged up the swim platform and aboard the Viking thru the “tuna door” in the transom.  One grizzled and grey, the other middle-aged, they were both hypothermic, shaking and barely able to stand on their own.  They said they’d been in the water all night.

It took 20 minutes to effect the rescue.  All thoughts of their fishing expedition gone, the Viking headed for port, post haste.  She didn’t even take the time to raise her down riggers.  Calling ahead to the marina, captain asked to have the Constable on hand as they made dock.  Now a whole new set of “action” came into play.  A Coast Guard helicopter was sent to locate the abandoned smuggling vessel.  It was found, already being looted by two other Bahamian vessels.  Narcotic Agents from Nassau had set out at the first MayDay call and they arrived as the Constable was taking the rescued smugglers into custody.

That night at SunDowners, one fishing captain was recounting the fight of the big Blue Marlin his vessel had hooked into that afternoon, while the captain and crew of our Viking had more exciting tales to share.

Lesson of the day:  Be prepared for anything, take what comes and share the stories.

ps.  Happy news to tell:  My story "How I Found My Bliss" is one of 12 up for votes at Canadian Family Magazine on-line.  Click the link and cast a vote in my direction if you think it's any good.  Thanks for the consideration.
Posted by Unknown at 6:00 AM

Wow what a fishing trip.

Oh my! that's some catch!

Sounds like something straight out of a bestselling thriller. Have you considered a writing career? Glad it ended well.

Oh, my gosh, now that is a fishing trip! Pretty cool your other story is being nominated but I am not surprised, I totally enjoy your stories and writing!!!

That was some fishing trip!! I love your stories, Rosemary!