The beach and pool were deserted again today.  Good news for those of us liking the privacy and freedom to go bikini-clad in all our flabbiness.  Bad news for the marina owner/operators languishing in the doldrums of receivership.
Through the 1950's to 70's, this Island Paradise was home to the Crown Colony Club,  where Hemingway and his ilk plied their fishing boats across the waves by day.  They quaffed hors d'heuves (spelled "appetizers") and cocktails, dancing in the club bar at sundown and dined in style at 8 aboard their sport-fish vessels.  It was the perfect get-away-from-it-all destination for the rich and famous, home to fishing tournaments and boating rendez-vous.
By the early 1990's, investors with visions of mega-wealth flocked to the Bahamas with their eyes on white sand beaches and azure water resort possibilities.  They began buying up what the Bahamian Government would allow them to take.  Family Islands were out-of-bounds, but Cays close to, or with pre-existing air strips were up for grabs.  Promises of water makers and sewage systems large enough to service indigenous populations as well as proposed resort facilities, and the tantalizing prospect of jobs in an environment of huge unemployment, led officials and bureaucrats to turn a blind eye to golf course pollution run-offs killing ocean reefs and commercialization of Paradise.  Glossy brochures, boating and travel magazine articles and high-tech on-line videos extolled the virtues of living the good life in Old Bahama Bay, Grand Bahama Yacht Club, Bimini Bay Resort, Royal Island, Emerald Bay, Chubb Cay and Fowl Cay...this is a partial list.
Then came THE CRASH.  1998 left people in real estate and money management "underwater" and reeling.  Investors were not just worried, they were devastated.  Those with bigger backing tried to hold on and keep building, while those with smaller holdings just vanished into the night, walking out on payrolls owing and out-standing bills.  The allegations of loss are mind-numbing:   $40 million on Chubb Cay,  $250 - $280 million on Emerald Bay, for two.  We spoke with a gentleman on the beach recently who claimed to have lost $20 million all by himself.   Even the lowly Bahamian contractors that laid out to cover building materials, cement making equipment and the like, were left holding the bag.  Generators and materials still sit on dock sidings--delivered, unclaimed and unpaid-for.
So here we sit in Chubb Cay, the place to ourselves.  The only people and a dog on the beach, the only couple in the restaurant and bar.  As with most anywhere, a photo taken from one vantage point can make a place look fabulous.  Check out these picture post cards I made with My Memories Suites-3 and tell me this doesn't look like heaven on earth. 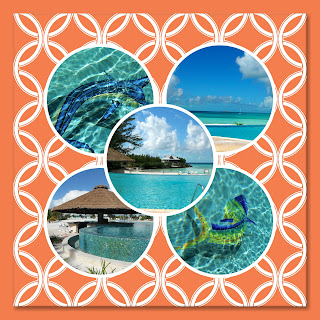 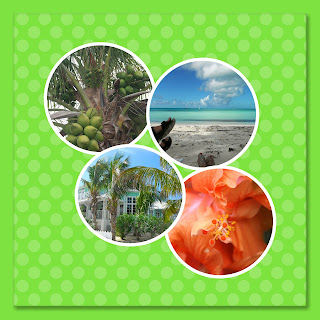 Now look at photos from a slightly different angle showing the damage, neglect or squalor that would rather be ignored. 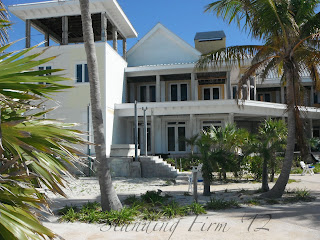 Buildings are left unfinished, crumbling and rotting before they've even been completely built.  This "club house" has a rotting foundation, an open roof and rusted out I Beams in the internal structure. It needs to be torn down, but as with all things Bahamian, it will probably stand like this, unfinished and slowing decomposing, until the earth reclaims the foot print. 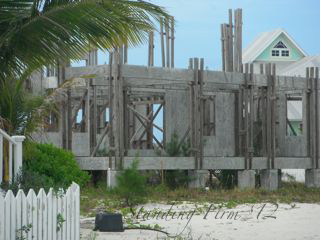 Someone put a down-payment on this house.  When the whole project went belly-up, the buyer just walked away.  No more money, no more work.  The neighbours are crying in their beer. 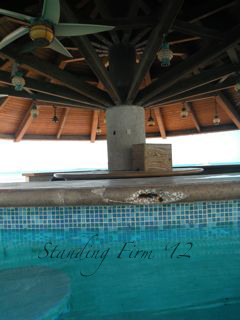 This incredible infinity pool and bar was filled and set to go before the mortar was even set, resulting in tiles falling off and hunks of cement moldings falling away.   Note the one working fan...and four others all broken.
Together with shattered hopes and dreams, the grandure that was promised is fading away.  In this third world country, the indigenous population is saddened to live with these derelict reminders of failure and loss of promise once again.  They go back to the sea.  They bring home fish for supper and shells to make souvenirs for tourists in Nassau.

ps.  A reminder to cast a vote in my direction on Canadian Family Magazine on line.  You can't imagine my joy at being chosen as one of the contestants...I'm in great company!
Posted by Unknown at 6:00 AM

such a shame to have all that just disinegrating. And the poor people who have to live with it daily.

Too bad. Hope everything works out for the best.

It really is all very sad, isn't it. As you say, those first photos really do look heavenly, but then you show us the other side of the coin. Well, at least you can enjoy the peace and quiet!

It looks beautiful. Even bankrupt!

So sad, very sad when a community is struck by lack of planning and then a bust, it is a double whammy.

This is so sad! Hope everything will work out well for everyone.

That is so sad and if economic times don't improve it will only get worse. You're right, the sand and sea there look like heaven on earth but, who's gonna enjoy it if the economy is bust and second homes and vacations and the tourist industry goes awry. Those are the things they depend on in places like the Bahamas to sustain themselves. It's a loss on all our parts and even sadder to know that the natives are therefore unemployed, their economy and families suffer for it and that even the environment suffers for it. I hope you manage to have fun anyway; with your positive attitude and aptitude for making things fun I have a feeling you will! Blessings, Tia

Why don't the owners reduce the cost of dockage to get some activity???? These places are empty and yet if you show up they demand $2.50 ft plus $100 for electricity etc etc.