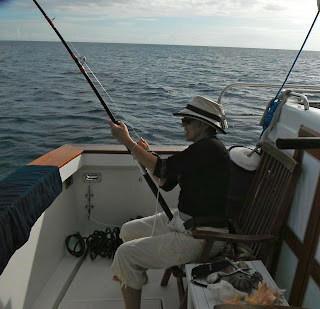 We didn't get in as much fishing as we would have liked this year, what with one thing and another, but what we were able to accomplish was thrilling.
The instant adrenalin rush as the reel screams, the fish taking the line.  We jump into action.  Getting the rod out of the holder on the deck and into the fighting belt is the first order of business.  Next, clamping down the drag so the line stops peeling off the spool so quickly.  And then the struggle to reel in the fish as he fights to throw the hook, swallow the bait and get free.
We only came up empty once--every other effort was well rewarded and we dined on the most delicious fresh fish many nights. 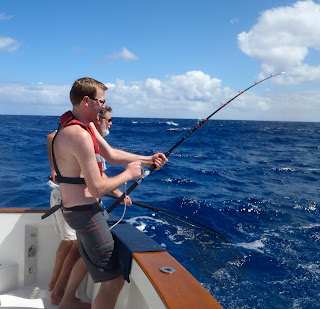 Woody broke the spell of the jinx that has kept him from catching anything for the past four years.  Boy, did he ever break that jinx for good! 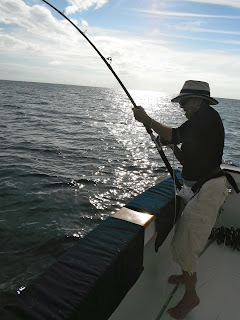 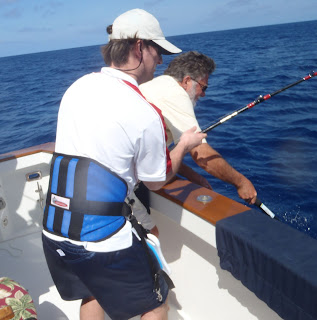 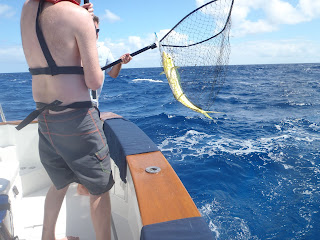 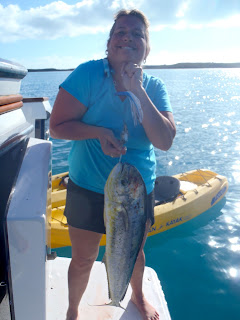 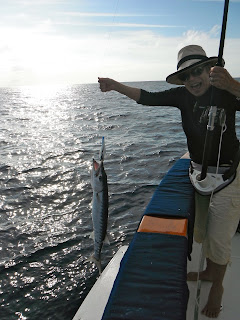 Barracuda.  Better than nothing.  We never eat them but they are fun to play with. 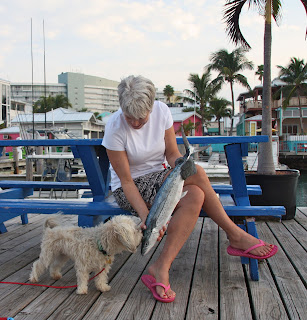 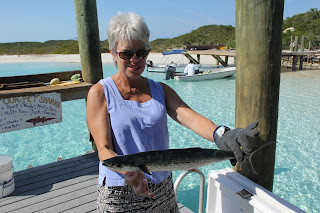 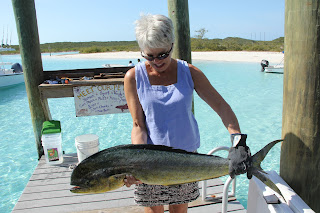 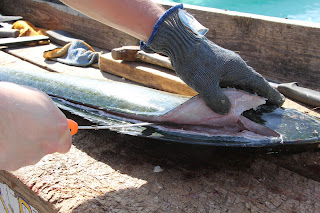 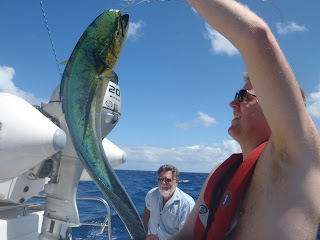 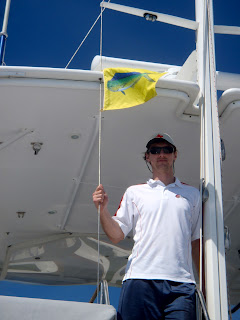 The Trophy Flag.
We raise it coming into port, boasting our catch.
Hey, Everybody!  Look at us, see what we got!
Okay now.  Who else out there likes to fish?

Fishing is GREAT fun! But I only recall doing it once from the big boat...

and I recall an afternoon in the dingy with you.

Not sure we caught anything nearly as yummy as your catches this year!

Looks like a successful season and everyone--including Nelson--had a great time.

Super photos for us today, and I just love Nelson (what a great name for a sailing dog by the way!!) - he is just soooo cute! I love fresh fish. My boss used to go fishing and always brought in fresh mackerel, and they were fantastic!

I used to fish, but haven't done so in a loooong time. When I was a kid my uncle (a fisherman), used to give us barracuda all the time. I used to love it. As a adult, I have no idea why...

I like to fish if only someone baits the hook for me!!

I've only gone deep sea fishing once with my high school mates and I loved the experience!!

It's been so long since I've done fishing but I have always loved it! Great story!
Hugs~

I'll tell you a secret, I have never caught a fish. Always wanted to. I should make that a goal for this year. Sushi is sooo yummy. Love your pics lady!!!