The old gentleman shuffled from his front door to the weathered picnic table across the road, over looking the beach.  I’d seen him there three or four days in a row—always wearing a peaked cap over his grizzled hair, a tattered cotton shirt and a pair of faded gabardine pants.  He’d sit for 30 minutes or more, gazing out to sea while Nelson and I played fetch just below his perch.

Today I approached him.  He was friendly and encouraged conversation, as older folks do when they have no one to talk with regularly.  It wasn't long before the derelict boat on the rocks not far down the beach was our topic. 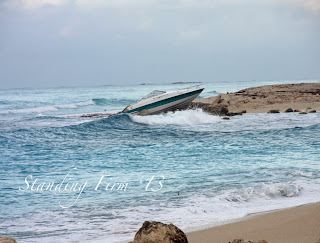 -Do you know that story?

He began the tale of an organization in the Dominican Republic known for smuggling human organs for transplant.  I was startled, to say the least.  I shook my head.  The beer crates lining the shore and the notorious reputation of this “drinking island” seemed to suggest another tact this story should take.  Maybe my eyes got wider.  Maybe my face showed incredulity.  He soldiered on with his story.

-Seems t’ings got too hot in DR and two Russians made a run for Miami.  Russian nationals escaping severe legal consequences in the DR flee to Miami.  My eyes widened again.  The story continued.

The “legals” State-side were ready and waiting, he told me.  It was a short visit to the USA for the two Russians.  They snatched the 24 foot Bayliner, adding Grand Theft Marine to their rap sheet and made a dash across the Gulf Stream to the Bahamas.  As Hurricane Sandy lashed up 30 foot waves, Boris and Demetriy thanked God when they crashed ashore and hadn’t pich-poled or broached into the 3000 foot watery grave they’d just crossed.  Now it was the legalities of Bahamian Customs and Immigration they had to deal with.  Out of the frying pan, into the fire.

Bimini is a tiny island.  Any new face, especially one matched with a thick Slavic accent and a ship wreck, immediately gets the red flag.  The two con men were on the hot seat in the offices of C & I.  Sticky questions with no answers were piling up around them.  Their throats pulsed with each pounding beat of their hearts.  They needed to get outta there!  The typical deluge of paper work Bahamian bureaucracy demands was swamping them.  They were goners for sure.  When the agent stepped out of the office to get a breath of fresh air, untained by the rank body odor of the two polluting his office, it was the opportunity they had been praying for.  They dove out the office window and vanished into thin air.

Where’s there’s smoke, there’s fire, the customs officer concluded.  This devious behavior demanded backup re-enforcements from Freeport.  Sea planes, helicopters, BASRA cutters and speed boats, all bristling with high-powered ordinance, swept over and around Bimini faster than you can sing one chorus of the Macarena.

-Dey were holed up on de north end of de island for more ‘n two days.  Of course dere’s no place to go and de whole place be surrounded.

Was he telling me the whole island of Bimini was surrounded by a SWAT Team?  His milky eyes slid over my face to check if I was getting all this.

-Yes, Mam’, totally surrounded, de whole island.  It got to where dey had no food an’ was hungry.  Dat’s when we got ‘em—dey came out looking for food.

-So, what about the boat?

-Well, t’was stolen of course.  De engines is ruined, but everyt’ing else be long gone.  Oh yes.  He smiled at me, several teeth either crooked, blackened or missing altogether.  What else you wanna know?

Captain B laughed out loud when I related the tale.  I didn’t find anyone to corroborate the facts, but several others offered versions of smugglers, pirates, people from away.  I offer this story for entertainment value and nothing more.  Perhaps on a return visit to Alice Town, if the sea hasn’t claimed the wreck, I will have an opportunity to investigate further  I’ll let you know.  Until then, it’s fun to speculate, fantasize and wonder.   They say truth is stranger than fiction.  Perhaps in this case, the adage holds true. 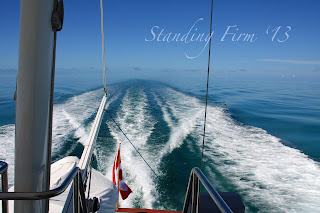 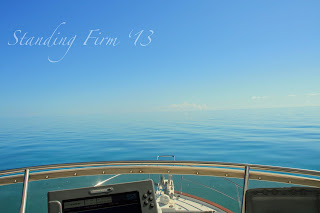 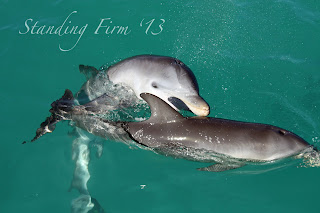 On another front, we sailed for two glorious days out of Bimini, first to Chubb Cay and then on to Royal Island.  Look who came to play while we were deploying the anchor.... 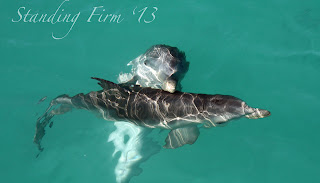 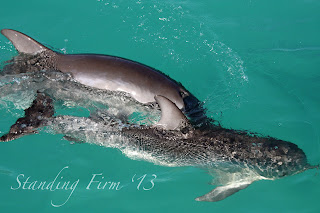 How is life going ashore these days?  Are you all freezing to death and holding your breath til spring?  I'd love to hear from you.  I'm hoping these photos and happy tales of the sunny south will bless your souls and keep you smiling until next time.

Loved the story! You always tell such a nice story. and the photos make me want to jump in and swim with the dolphins. It is sleeting in this part of the sunny south today. Freezing rain all night. Brrrr! :)

Your stories are always so interesting, Rosemary!

Life ashore is mostly wishing we were on the beach. Gorgeous pictures and great story!

You're too cool. Love it!

Wow! It sounds like movie material or at least a TV show series - location, Bimini. :)

Thanks for visiting 1camera1mom and leaving a nice comment!

Great story Rosemary!
The weather here is just like it always is...MILD! Some folks say it's boringly mild.