For Everything, There is a Season

Yes, the seasons are changing.

We left Maine on a chilly, but glorious, sunny day.  For the first half hour of the drive home, I kept begging for the car to stop so I could get "just one more" photo.  We found the perfect, red blueberry fields.  This year was my first opportunity to see their festive cloaks and I couldn't get enough. 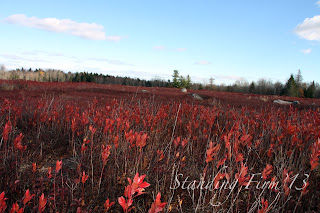 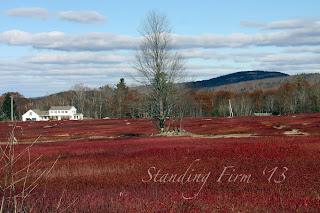 Although all the leaves haven't fallen yet, we are getting buried in them, back home in Southern Ontario.  10 bags full and counting..... 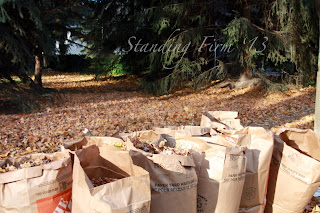 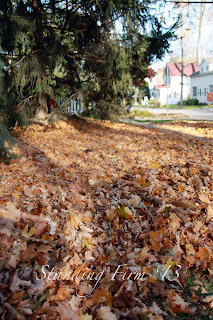 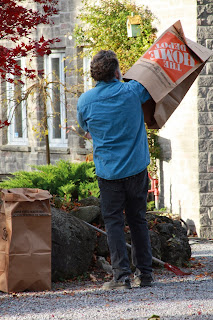 The deep, Home Depot bags are what our very particular garbage man WILL collect, as long as they are not over filled, or too heavy. 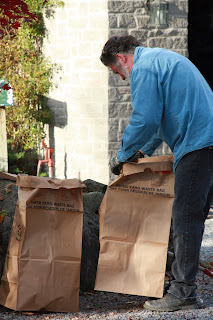 Hubby, ever compliant to the sanitation department's wishes,
has a routine and ritual for doing things according to the rules....

All summer, our ancient lawn mower had one problem after another.  New cables.  New levers.  New plugs.  The men in the family took turns fixing and babying it along all season.

Yesterday, first one and then the second front wheels fell off. 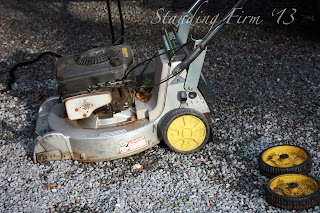 Mr. Determination is using it anyway. 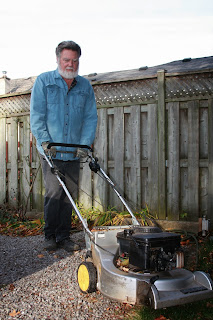 Although we are luckily enjoying above freezing temperatures today, it won't be a surprise when we wake up one day soon to a white world covered in snow.  Shovelling snow mixed with leaves is nobody's favourite thing to do.  We are making hay while the sun shines, so to speak.

This weekend was the annual Niagara Life Christmas Home Tour.  I toured yesterday and volunteered today.  I got so inspired and into the spirit of it all, I came home and decorated with Yuletide gloss and glitter.  As soon as Hubby raked away the leaves and disposed of the Halloween Pumpkin from the front door, up went my green boughs and pine cones. 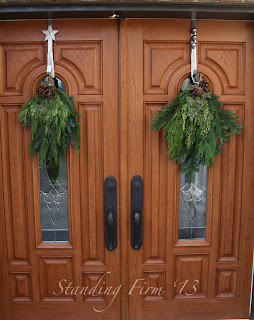 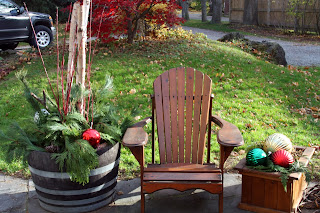 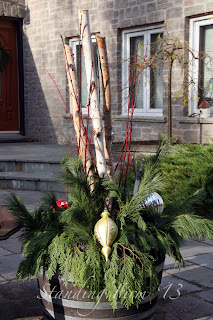 Last spring, when I came home for Easter, the by-then-totally-dead-brown-and-withered wreaths were still hanging on the front door.  Lesson learned:  don't put up more than you can take down before you go away, even though it is still holiday season for another 3 weeks.

I moved Grandma's Cape Rosier Racer sleigh and the snow shoes to inside the front door, festooned with a big red velvet bow.  That's about it...for now.

How about you?  Are you stringing your lights up outside before it snows?  Or do you wait until mid-December and freeze your fingers off?

Posted by Unknown at 3:57 PM No comments:


As our cruising buddies are already heading south, we took off for the East Coast.  Again, it was a two-day drive, but this time it was in the rain and mostly in the dark.  As we were trying to turn on the hydro and electricity once we arrived, we were befuddled. The low rumble of the neighbour's generator finally gave it away.  No Power.  Nada! 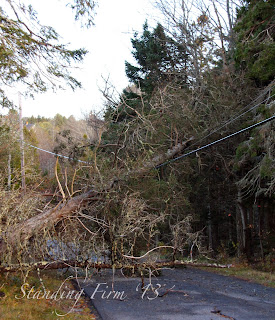 A short walk toward Bateman's Cove/Sand Beach revealed the problem.  The 90 km/hr winds had taken out an old spruce.  No, Chrissy, not the widow-maker birch you feared all summer. They are still standing, lurking, waiting.....

A mere 22 hours later, the Bangor Hydro repair men sang out the window of their speeding truck... 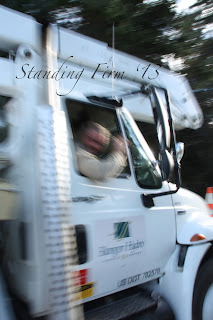 -Only another 15 minutes until you get your power back!

Power meant the pumps would work, which meant we would have water, which meant we could flush the toilets (by then nearly brimming with delight). The joys of country living!!!

Saturday dawned sunny and bright.  Although we were quite chilly inside, the sun through the A-frame windows warmed us up nicely in no time.

Visiting Maine in November is quite different from summer visits.
First of all, there are many fewer cars and hikers on the roads (read: practically none)  and the year-round residents seem to come out of hiding, taking over the whole place.

Case in point:  I have never seen this before, although I have heard it happens from time to time... 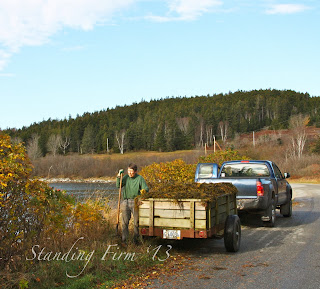 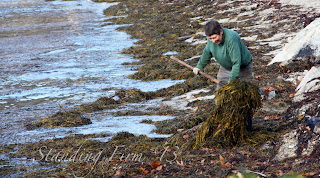 She says she puts it on her garden.

As per the year-round residents, there are so many crows, but no Bald Eagle sightings so far.

The all-consuming quest for blueberries in August is replaced by the search for the best red-fields-photo.  I did see the "best one", but we couldn't stop to get the shot.  Today I tried my best and got some good ones, but nothing like the totally red field I saw driving in the rain on our way in. 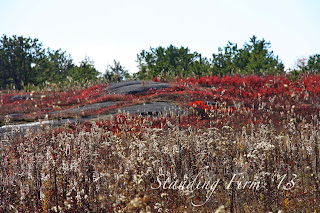 (at Polly and Don's) 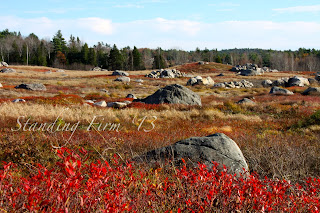 (on the way to Blue Hill) 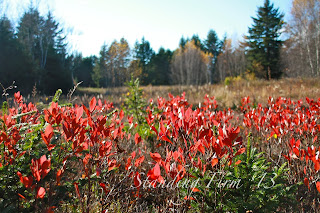 The fall scenery is spectacular. 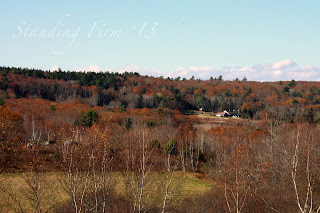 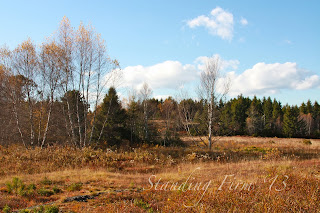 Johnny Apple Seed must have hiked thru this part of Maine in his day...
There are several trees gone wild right across the road from our property.
Maybe it's time for apple sauce? 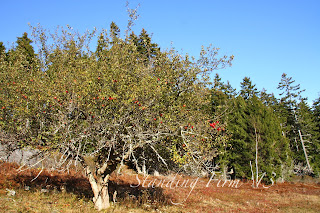 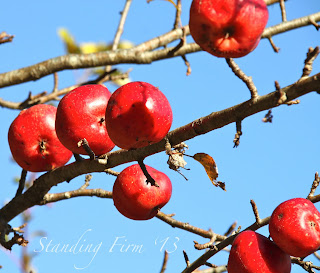 It is the first week of hunting season.  That means....Neon Orange on anybody that wants to go out-and-about for the rest of the month, man and beast. 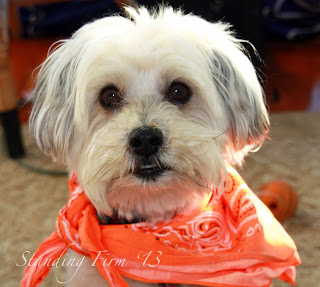 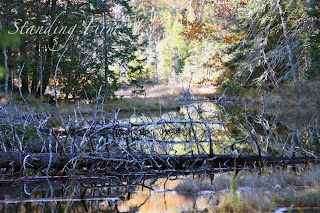 I've been trying to get this shot for three years...a morning in summer is spectacular.  However, the green growth and the bog are deterrents, along with the threat of snakes and quicksand my husband alludes to.  In November, I could get close enough to take a shot and be happy. 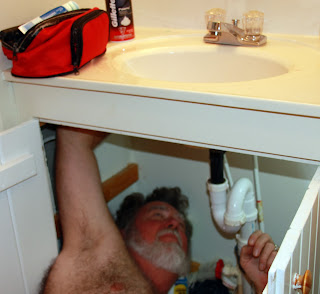 Another seasonal change is that we get to stay in the Chalet which is rented out in the summers to our many repeat visitors.  Every time we take up residence, we find issues.  This time it was a never-ending-running toilet and a dripping faucet in the upstairs bathroom. 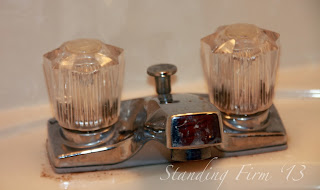 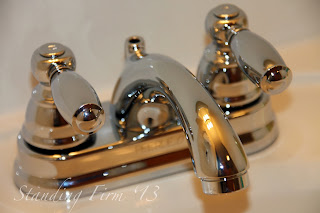 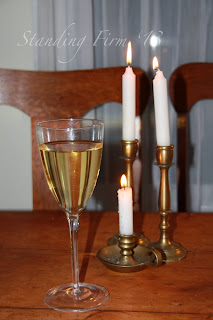 And...yes, we need new, and more, wine glasses in the Chalet.  One thing our guests can be assured of:  your hosts live here too.  :)

How is November treating you guys so far?  Are you gearing up for Thanksgiving?  Are you already shovelling snow?  Has the Channel Crossing given you grief?  Will Spring be a sunny and warm season in Oz?  Tell us how it is for you.  I am revelling in the change of seasons and trying to keep warm doing it---layers.

Posted by Unknown at 6:19 PM No comments: