It’s so hot out there, I’ve decided to sit in the air conditioning and play on my laptop.  The Mad Dogs (Nelson) and Englishmen (Captian B and the kids) have gone hiking, leaving me in peace and quiet.

Since we last caught up, Steadfast has had the usual adventures with Cruisers’ Regatta in George Town harbor.  Captain B and I did the Poker Run, our first time, and learned more about the bar scene of Grand Exuma Island than we ever have wanted to know.  It was a ton of fun, racing around in our dinghies, getting a card from each of 5 locations and then "playing" our best hand at the end.  Of course there was a lot of eating and drinking involved...  We were required to dress for the occasion, reflecting the Margarita Ville theme. 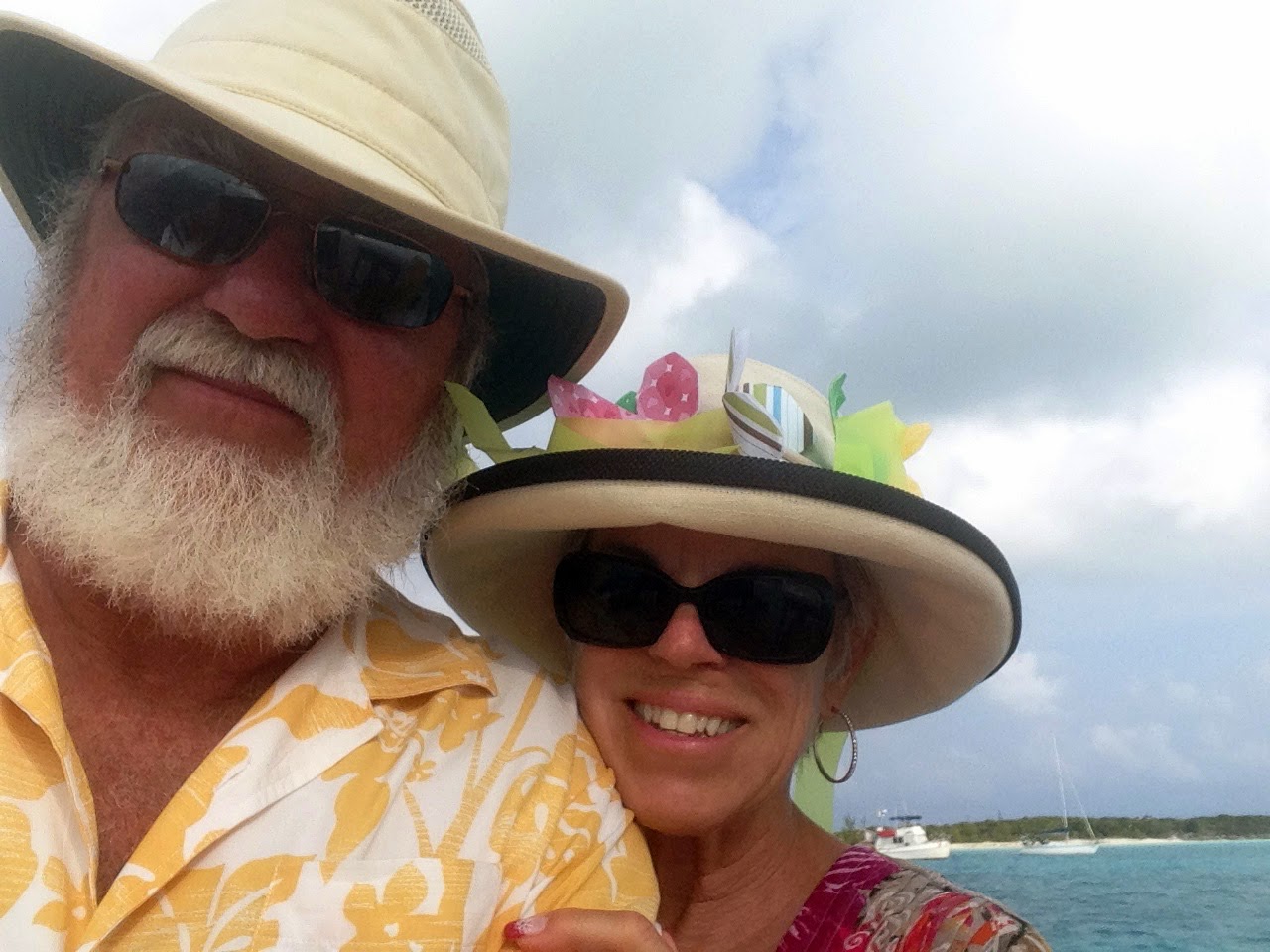 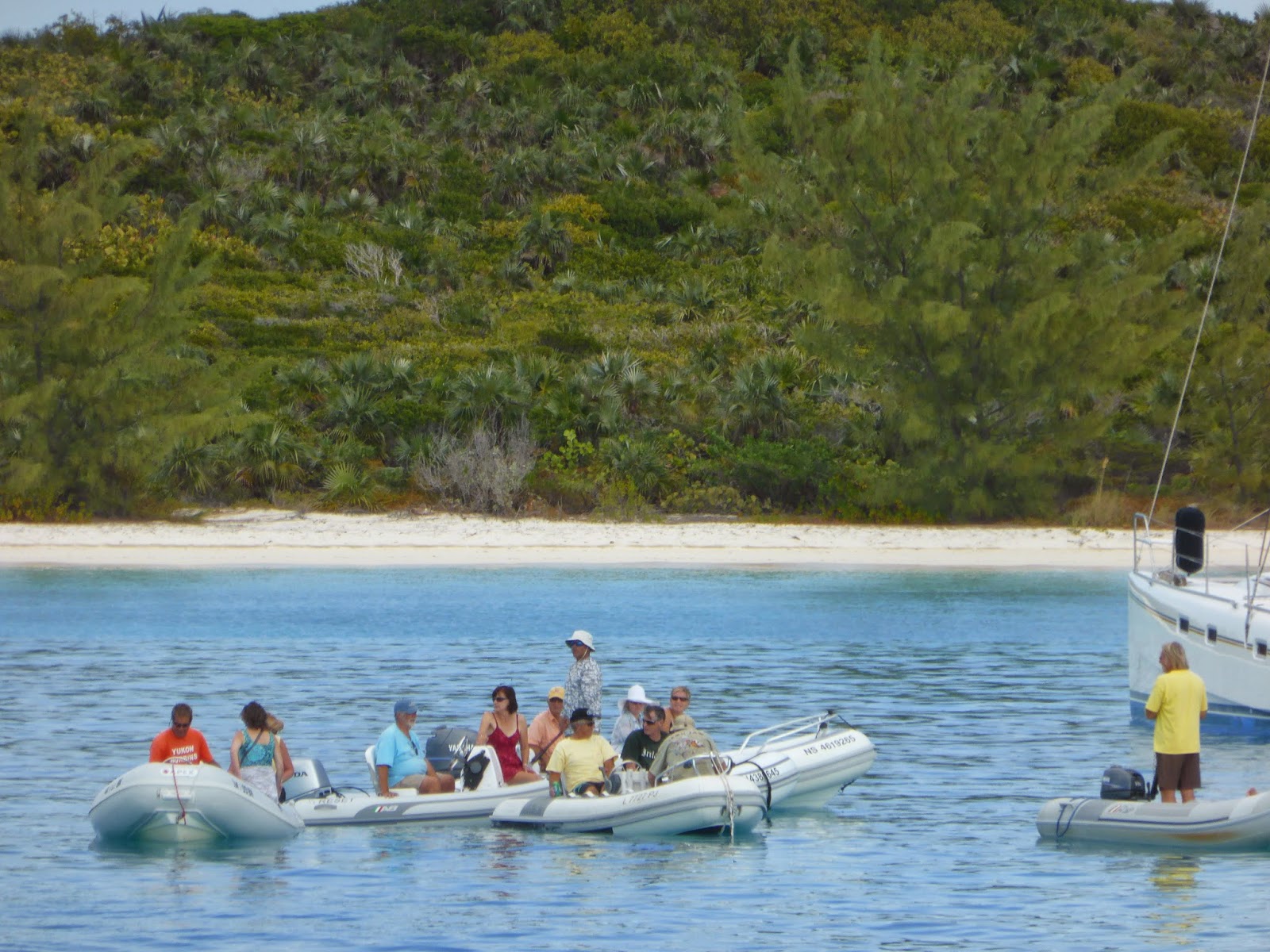 Steadfast rode safely at anchor off Sand Dollar Beach for two weeks, thru several strong blows.  We assisted two boats near us reposition after they dragged, encroaching on our swing area.  Captain B is meticulous in setting the anchor, checking and rechecking that it has truly “dug in”.  The seven to one (and 15 to one for storm conditions) ratio of depth to length of anchor rode is religiously followed on this boat.  Not all boaters are as experienced or as knowledgeable as my handsome skipper.  As wind shifts and tides change, the boat swings the full radius of the length of the rode.

-Excuse me, we have 125 feet of rode out.  I think you are setting up too close.

About sunset, I deploy every fender available on the side of our boat facing the offending sail boat, to give an obvious hint that collision is a foregone conclusion.  No reaction.

-Yes, Rosemary, I did specifically tell them about the forecast front coming late this evening, and yes, I did tell them we have 125 feet out.  They said they’d watch it. (You know, it’s the privilege of crew to sometimes question the Captain and not have it called nagging.)

We waken at 10:30pm as the boat is rocking to a new and bouncy rhythm.  Captain B goes outside to try and raise our now extremely-close neighbours.  He calls a gentle “hello” and flicks his flashlight on and off at their port holes.  The people who said they’d “watch it” are sound asleep, below decks.

-Okay, okay.  Without another word, the sail boat comes to life, pulls in their 50 to 70 feet of rode and moves off in the dark and stormy sea.  One can only hope they learned something……

It’s been a great fishing season so far.  Lots of fresh fish for suppers and lunches.  Fish fingers for cocktails too.  Yummy! 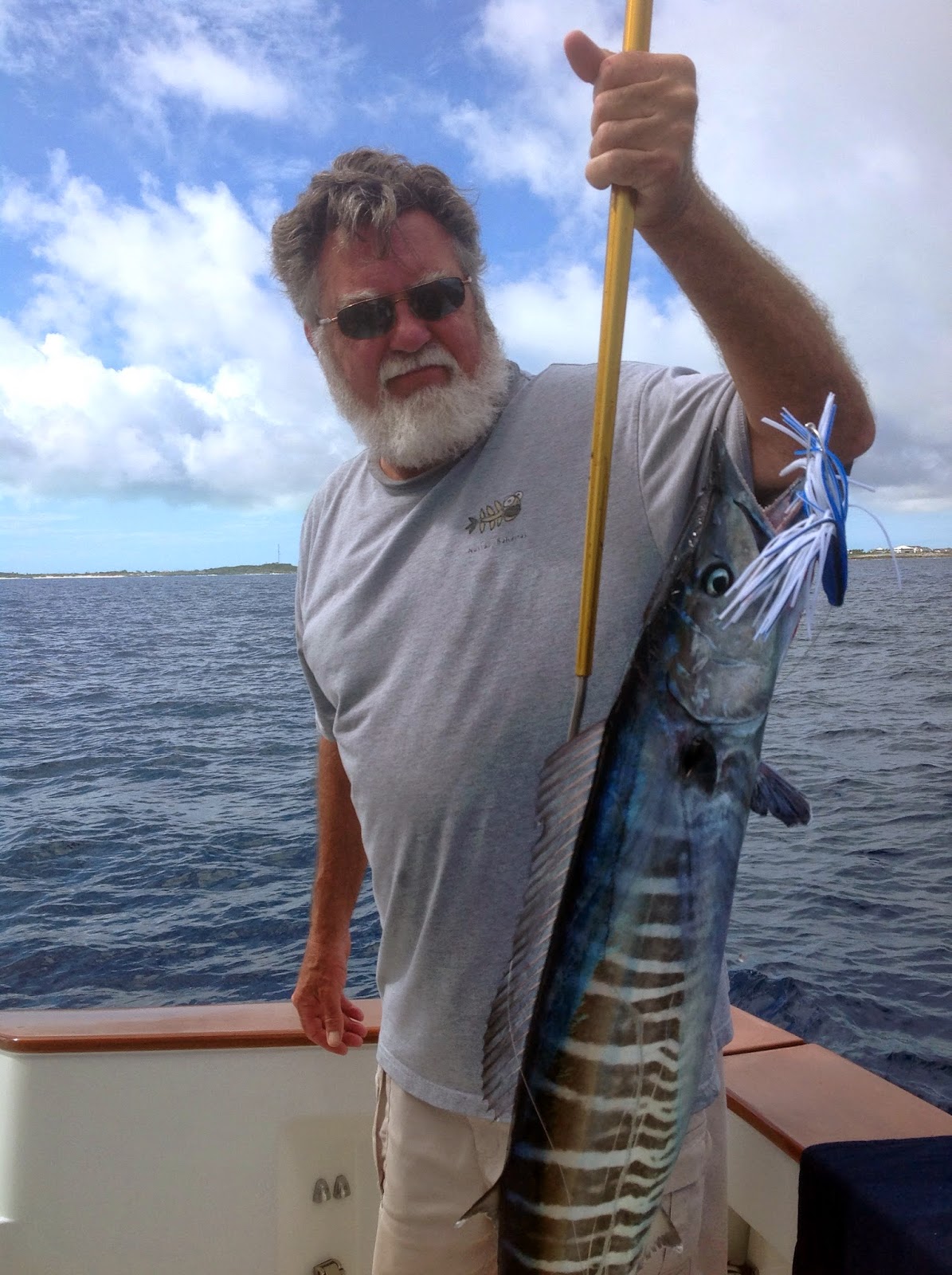 I declined the offer to accompany the gang on their hike, because I’d just spent the last hour on deck, sweltering, trading fish stories with Tucker, Jamal and Deno.  It was hot, but thrilling conversation.  There was reminiscence of unimaginably large schools of Grouper just off shore, close to Compass.  There were tales of diving and close calls with 15-20 foot sharks.

Tucker told us about the giant squid pulled in some months ago by local fishermen.  It had a big shark bite out of its side, dead and measured 20 feet long and 8 feet wide!  They had to bring it in, or people wouldn’t have believed their story.  Everyone took photographs.

Jamal’s story topped them all:  six years ago, two men, went fishing out of Nassau.  The weather turned bad and they were reported missing, presumed drowned.  Five days later, Humphry’s fishing boat pulled in a 14 foot Tiger Shark off Green Cay.  As they were trying to disengage, the shark regurgitated a human head!  Imagine!!!  They had the presence of mind to shoot and kill the shark and take it in for authorities at the Royal Bahamian Defense Force, back in Nassau.  When they hung it up and sliced it open, a fully intact, human, male body fell out.  The man was identified as one of the missing fishermen.  Shiver me timbers! I'll be having nightmares from that one.

Well, the extremely hot and tired hikers are back.  The peaceful interlude has come to an end and so I will say adieu for today.  Play safe everyone, until next time....

As those at home are shoveling out AGAIN, snowfall after snowfall, we on boats are dodging weather fronts, one after another.  Windows for crossings, long hauls or just moving down island have been short and rare this season.  We’ve been waiting on friends to make an appearance in the Exumas, but they have been holed up in Spanish Wells for almost two months. Their case is an older, slower boat, towing a skiff (which makes it even slower).  They need wide windows of opportunity to relocate.  Looked like they were going to move on Monday, but squalls were predicted along their intended course about midway.  They are staying put, enjoying the hospitality of one of the prettiest spots in the Caribbean.

Those friends owe us money for supplies we dropped off for them on Compass Cay.  A boat here owes them money for parts they delivered.  We owe $20 for a mooring stay, which still another boat paid for.  If we all pay it forward, to the boats closest to us, the debts will eventually cancel themselves out, do ya think?

After a couple of attempts, where we gave up fighting the swells and breaking waves and took shelter in Big Majors Spot, we took a 6 hour window and made it to Emerald Bay Marina on Great Exuma Island.  This was our first time here and yes, we can now attest to the truth of the rumoured surge inside the marina basin.  The wind picked up and blew steadily from 30 to 55 knots for three days.  Steadfast deployed every one of our lines and all of our fenders to keep us from slamming into the docks.

This 50 foot Lagoon Catamaran wasn’t so lucky.  The force and weight of his vessel pulled a cleat right out of the dock at the height of the storm.  It was a bouncy three days at the dock, inside a sheltered marina.  Lesson Learned:  don’t go to Emerald Bay Marina if a NE wind/storm is predicted.

Cat:  Photos not available due to low wifi strength.  Welcome to the out islands!

Cleat:  It's quite a dramatic photo.  Wish you could see it too.

Another rumour has been proven true:  there is no pool, no restaurant, no supplies at Emerald Bay.  To visit the Sandles Resort next door, marina guest must pay $85/pp to use the facilities and dine in their restaurant.  $85.00 gives you a 7 hour pass and free access to the buffet lunch,  only if their occupancy rate is low.  If you want to take a tour and consider buying a time-share condo at Grand Isle Resort and Spa, marina guests can visit their poolside restaurant.  Beach and pool facilities are for resort guests only.

Fishx3:  You know I like to show off my catch, brag a bit and tell my fish stories.....sorry about no photos.

Yesterday, the wind changed direction and the seas laid down.  We cruised at 6 knots over the drop, making our way to Georgetown.  We caught three fish in quick succession:  two Wahoo and one small Mahi.  Once we were anchored off Sand Dollar Beach, Captain B took the Admiral Lord Nelson ashore and I cleaned fish off the swim platform—a messy, sweaty job.  I considered a swim when I was done, but sighting a reef shark circling, I changed my mind.

Orange boat: with four orange outboard motors, painted to match the hull of the Go-Fast Boat.

Under Tow:  Crashing waves, don't let Nelson chase his ball into the surf!

We are thinking of you at home and sending you as much warm sunshine as this post can convey.  Remember us in your prayers for safety and sanity.   No matter the weather, we can say:  this too will pass.

The wind picked up around 5 am today.  It’s been blowing 25 - 35 knots ever since.   Two foot breaking waves in the harbor.  The radio chatter in this crowded anchorage of 150 boats is, for the most part, calm and polite.

Captain B monitored the cruiser in front of us from seven to nine am.  The boat was obviously dragging, the captain asleep on board with his radio off.  As we began to consider evasive maneuvers, the captain of the upwind boat finally came above decks and assessed the situation.
-       Steadfast, are you dragging?


-       Some people say that boats DO drag upwind in this anchorage, but no.  We have our anchor alarm set and we haven’t moved.  Please reset your anchor.


As we munched our late lunch, our ears picked up chatter that concerned us.  Big drama off Sand Dollar Beach.
-       “Shunpiker”, the trawler off Sand Dollar, you have a white rope trailing off your bow.
-       That’s my anchor line dragging!  Give me a break, I’m single handed and doing my best.  I’m underway and dragging IT now.

Captain and Crew aboard Steadfast began making ship shape and forging our plan of action for all eventualities.  The two dragging boats were upwind of our position and bearing down.  “Shunpiker” was off our port side and seemingly getting himself sorted out.

Because there are so many boats in this one area and because boaters tend to rally to the call, 15 men in their dinghies flocked to the emergency.  From the fly bridge of Steadfast, it looked like orchestrated chaos.  “Duchess” (a 43 ft. catamaran) and “More to Life” (a 65 ft. trawler) were fast together, stem to stern.  A flotilla of dinghies lined up like tug boats along the hull of the cat, pushing her off the trawler.  Others began cutting lines holding the two ships together.
-       They’re free.  “Duchess” is free from “More to Life”.  She’s still drifting!
-       Can anybody give her another anchor?  A second anchor, anyone?

The dinghy flotilla shepherded “Duchess” to shallow water and got her back to rights with a new anchor.

In the chop and swell of the two foot seas, both boats sustained non-mortal wounds:  scrapes along hulls, broken/bent davits, air scoops, solar panels, anchor rodes and snub lines.  There will be an exchange of insurance papers and information in the next couple of days.  For now, everyone is happy no body got hurt.  The anchorage is relieved that no other boats were involved and THAT crisis is resolved.

Now for that dragging boat off Hamburger Beach…..

-  Hello All Stations, hello all stations.  This is a general announcement:  in light of the sea state and wind conditions, due to persist thru this evening, our Poker Night on shore has been postponed til Friday.  It would be imprudent for people to leave their boats tonight.  Thank you.