The Grands were coming for Easter Week!  What to do?  A visit to the Butterfly Exhibit?  No, that wouldn't work because some people are "afraid" of butterflies.  We made the mandatory visit to Niagara Falls on their last trip.  Hmmmm......

We ended up at Agape Valley Sugar Bush.  As we wondered if the sap was even running yet, it turned out that we were in time for the very last day of operation.  The season had started the beginning of March and was about done.

The hay wagon, pulled by an old tractor, took us down the hill to the "bush". 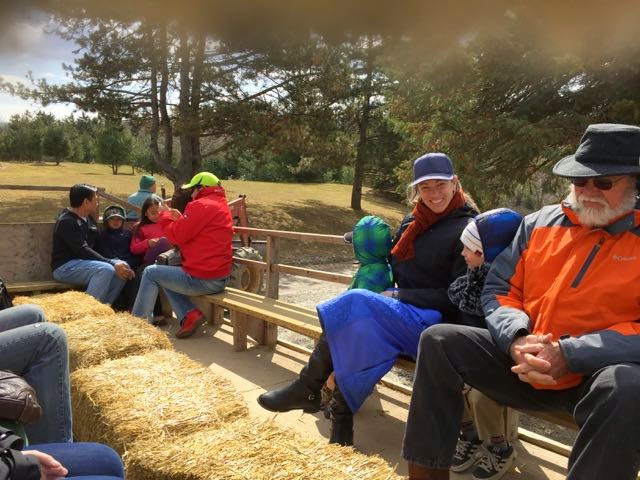 The first big draw for the little ones was the teepee.  Only Grandpa would let me take his photo there. 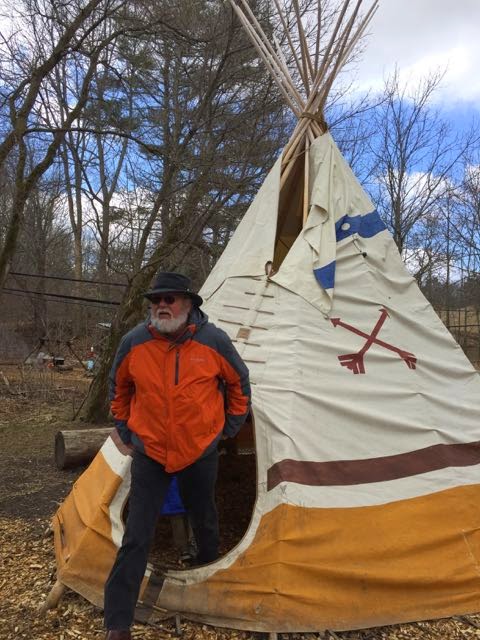 All of Agape is run by family and an army of volunteers.  Here, number one son is giving us the tour and explaining that 41 buckets of tree sap will yield one bucket of true Maple Syrup. 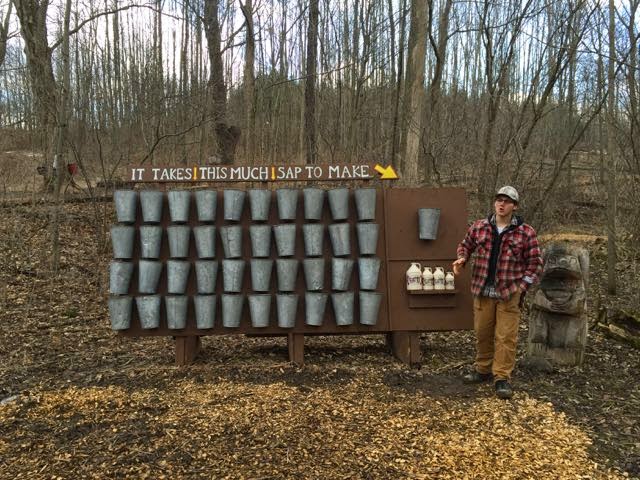 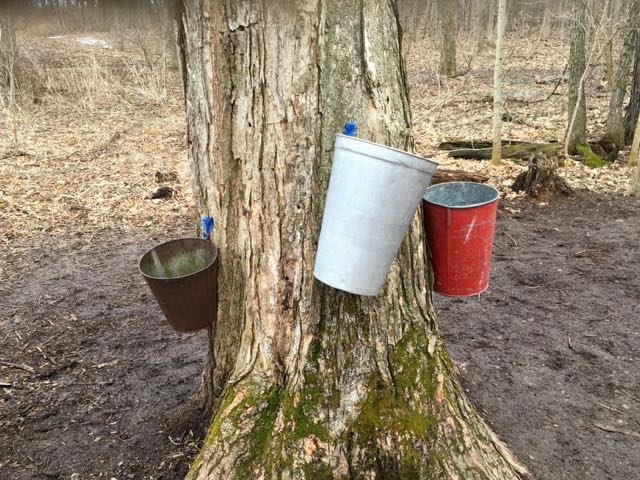 These buckets with the blue "taps" demonstrate the traditional method of collecting sap.  Back in the day, Farmer Brown would hitch up a team of horses to a sledge and spend a day slogging thru the woods, collecting up to three buckets on 150 trees.  There were accidents, including spills and frostbite.  Today, plastic piping connects the taps to tubes on all the trees and gravity pulls sap from the whole forest down to the Sugar Shack. 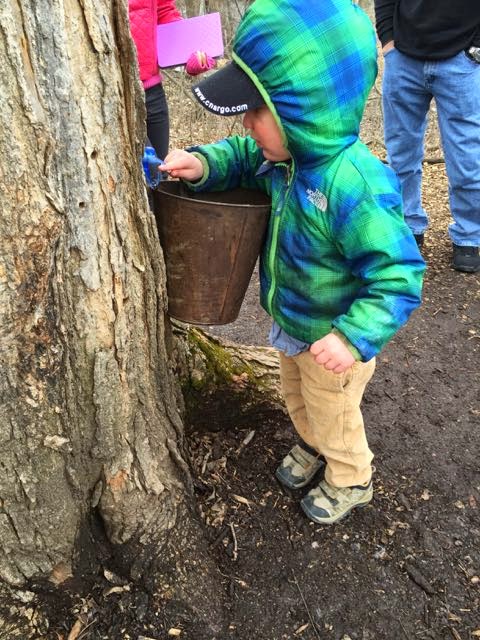 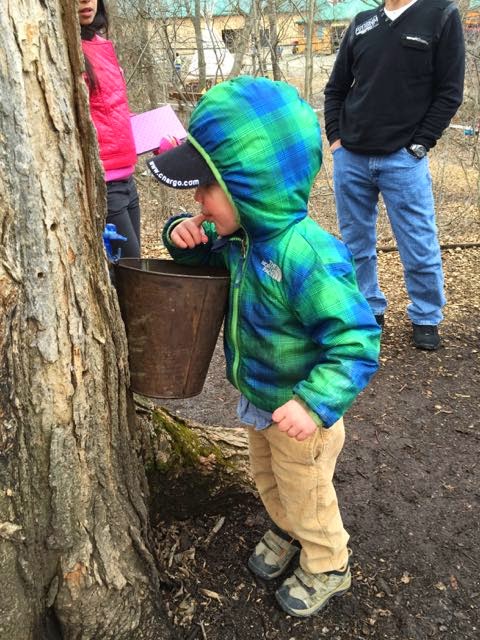 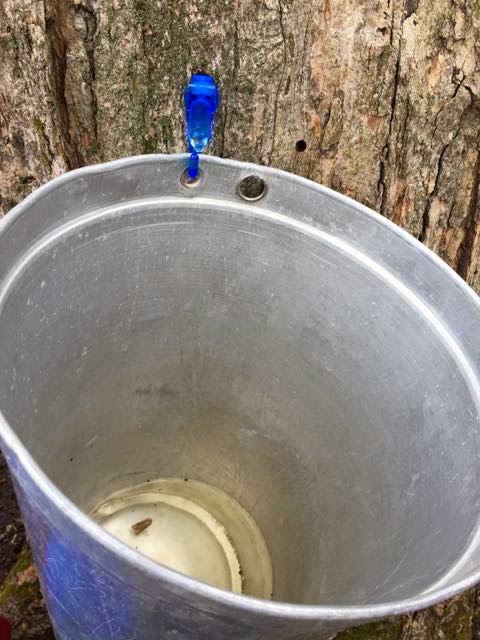 The slightly yellowed fluid has 1 - 3 % sugar, together with leaves, dirt, and squirrel droppings.  Hence the need for more work.

We were told a fanciful story of how the Native Americans found the sap:  Mister Indian Brave, out hunting, flung his tomahawk into a maple tree in frustration at not having caught anything for dinner. He was thirsty and so collected and drank down the sap that began running down the trunk of the tree.  Sweet.  Hmmm...  He took some home (in a canteen, a water bottle????) to his Squaw.  She added it into the stew and as it cooked, (boiled off the water) everything became sweeter.

Eventually, the Natives actively collected and boiled off the sap. 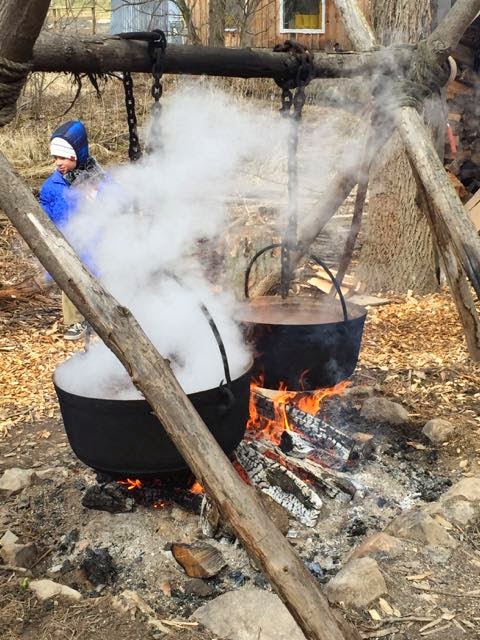 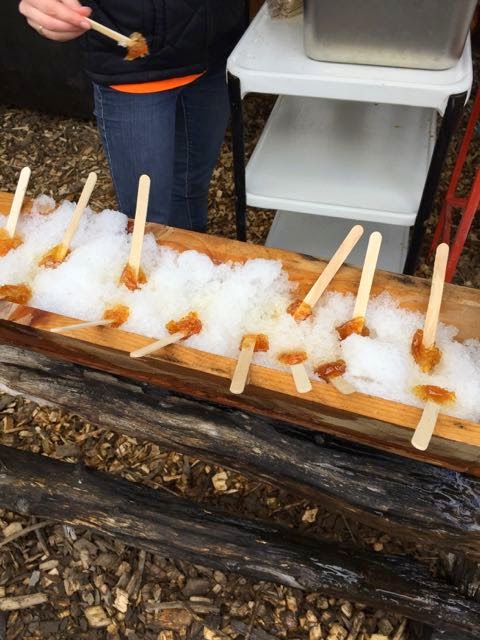 Today, sap is boiled down in "evaporators" like this one.  We were told that all Maple Syrup is 66% sugar, waaaaaay up from 1 to 3 percent in the Sap. 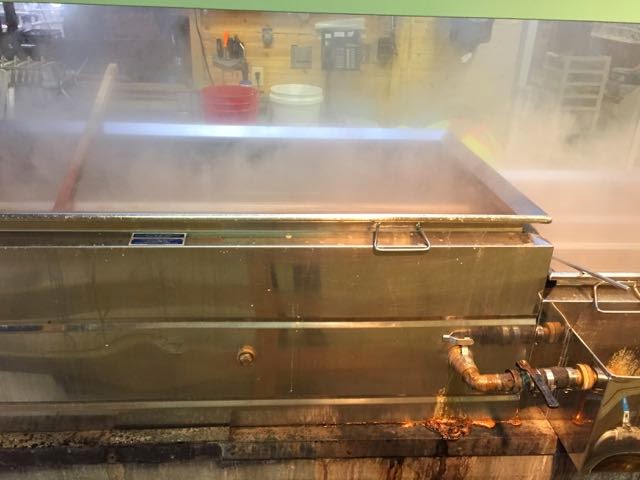 Good thing there was a fence.  Grand #3 was very eager to get a closer look. 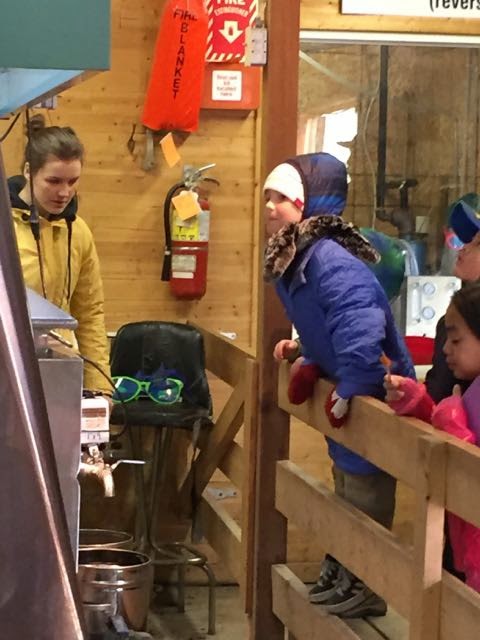 Every annual visit includes a trip to Young Headz, the salon for kiddos.
Grand #4 looks handsome in his new coif, as does his Mum in her's. 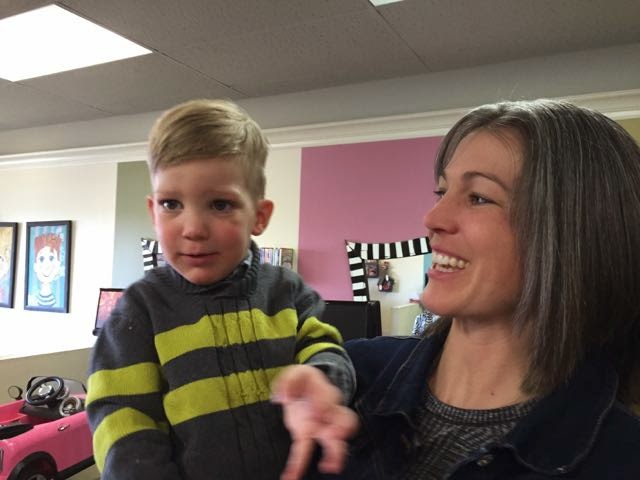 Then, before you know it, the visit was over.  The flight home was relatively painless.  Cabin crew were unbelievably impressed with the official-looking NASA astronaut outfits, and invited the tykes into the cockpit of our Boeing 737 for an inspection.  (note the 1/8th size violin on #3's back). 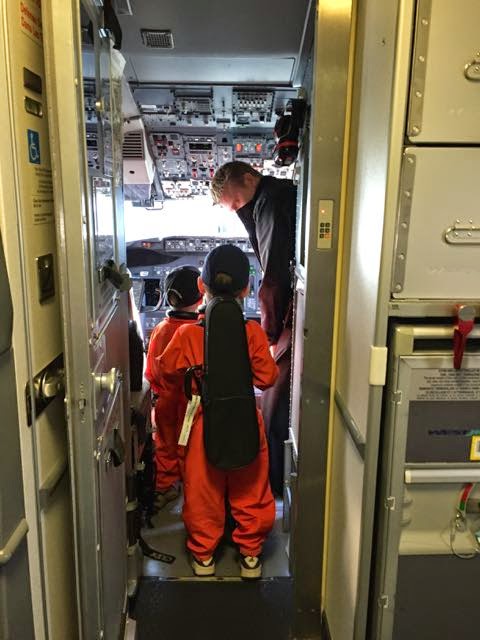 How was your Easter?  Did you celebrate the Easter Bunny or the Sacrificial Lamb?  Either way, I hope you were with family and friends, enjoying peace and love.  Blessings on you, my readers, for a new season of living.