Wet and Weary in Wuhan

Our third day in China found us at the peak of exhaustion from travel weariness and jet lag.  Captain B was also still fighting the good fight against a vicious chest infection.  He had insisted he wouldn't miss this trip for anything, even though his doctor strongly advised doing so!  Needless to say, another three bus trips and an air plane ride were not high on our list of things to do in China, or anywhere else that day.

If either one of us had been given a vote, we would have nixed the whole idea of a museum tour at 5 pm. after the day of travel.  Our tour guide insisted there was no option.  Well...we had travelled to the opposite side of the earth to see the cultural highlights of China, and whether we wanted to or not at that exact moment, it was going to happen.  As it turned out, it was very well worth the time and energy spent.  I wouldn't have missed it for anything, now that I know what I would have missed. 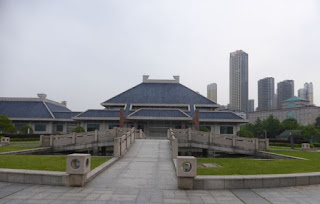 We were so late arriving, the museum had closed to the public.  They allowed our group in under special permission.  I am impressed with Viking Tours powers of persuasion!

The Hubei Provincial Museum is a large place, with imposing entrance and beautiful gardens.  It houses an impressive collection of artifacts from the Warring States period (500-400 BC). 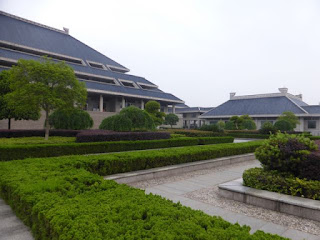 The primary attraction of this museum is an astonishing set of 65 gold-inlaid bronze bells.
Engravings have determined these bells were a gift to Marquis Yi of Zeng by his king Chu, in 433 BC.  Such an extravagant gift shows the length to which various kings went, to ensure the loyalty of even minor Vassels.  Every tiny fiefdom was at war with its neighbours, during that time, trying to hold power over as much territory as possible.  Kings needed all the support they could get.


The bells and many artifacts were discovered when the tomb of Marquis Yi was unearthed.  This collection is highly valued and considered a major prize of antiquity. 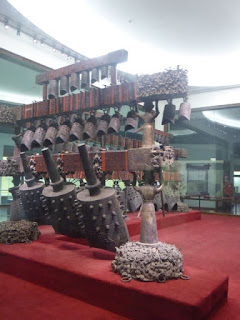 The set of bells cover 5 octaves and range in size from 8 inches (weighing 5 pounds) to 5 feet (weighing 448 pounds). 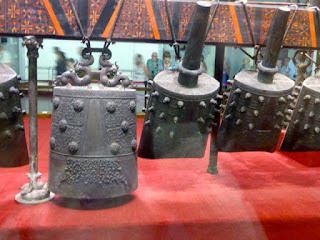 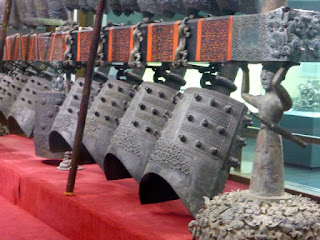 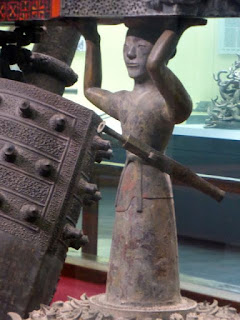 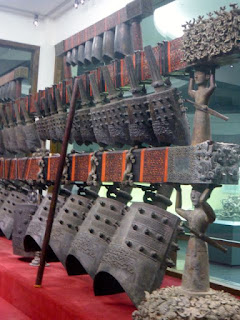 To listen to a short sample of what these bells sound like, check out this link:
https://www.youtube.com/watch?v=lov9kvphqfM 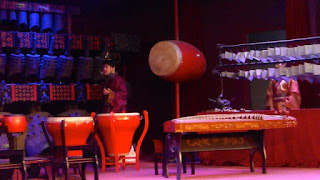 Notice the ancient stringed instrument at the front of the stage.  It has 24 individual bridges.  Can you imagine tuning that??? 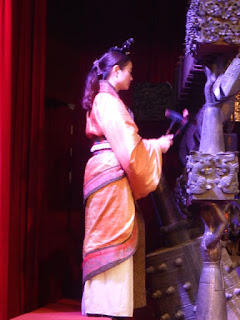 This photo shows the "tiles" also used in the musical performance. 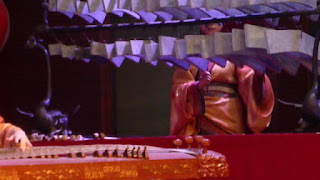 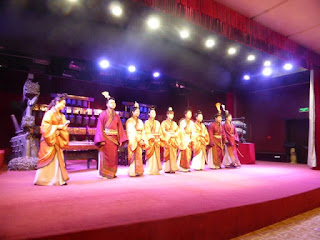 Among the many artifacts in the museum, we marvelled at the lacquer coffin of Marquis Yi.  Lacquer coffins were highly valued for their preservative and decorative qualities.  Again, one wonders at the ability of a lowly Vassel to afford such an outrageously expensive coffin:  King Chu was still coddling the Yi family and heirs. 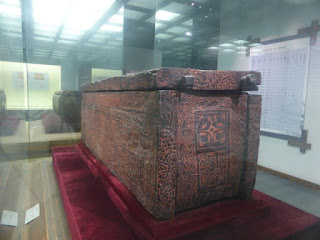 As the Egyptians, so the Chinese, and probably many other ancient cultures...they buried their dead with everything thought needed for the after-life.  Marquis Yi's burial chambers contained food and wine vessels, furniture, weapons, the bells of course, and the bodies of his favourite concubines!

A small sample of photos.... 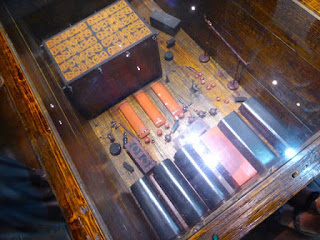 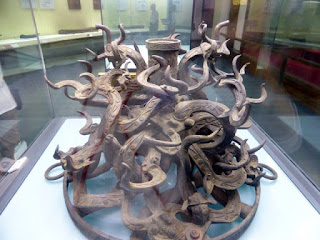 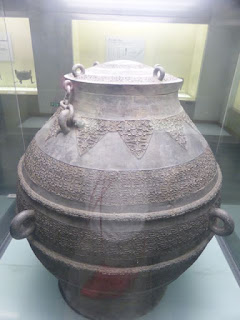 By the time our visit to the museum was complete, the sun was setting, rain was falling, and we were ready to find a place to veg out, preferably in a horizontal position.  Our loyal bus driver and local guide kept us awake and informed as we made our hour more drive to the boat--our home for the next five days. 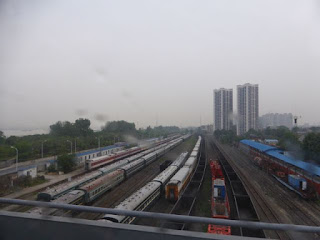 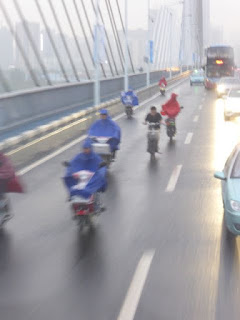 The Yangtze river at last.  I never found out what this was, illuminated next to our ship, but it appeared to be a ROUND boat! 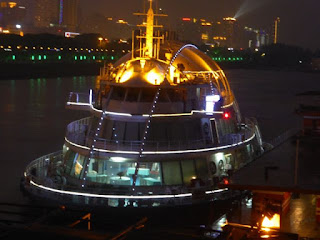 A dancing DRAGON and deafening drums heralded us as we boarded our ship, The Emerald Viking:  colour, noise and confusion as we staggered aboard, carrying what hadn't been portered for us.  We left all our cares behind us as we were royally greeted and ushered to our cabins.  There, a bottle of champagne and a bouquet of fresh flowers awaited us.