In 1780, Marquis de Lafayette captained L'Hermione across the Atlantic from France to America.  "She sails like a bird" he exclaimed.  Between 1780 and 1783, the Hermione was directly involved with America as she fought against the British in the Revolutionary War. 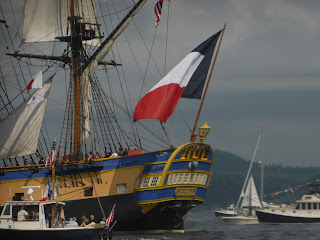 235 years after her first visit to this region, L'Hermione sailed into the active harbour of Castine.  In 1780, she was testing the waters, so to speak, checking the power and presence of the British in Fort George, where present day Castine has ruled since pre-colonial days.

The Crew and guests of Steadfast, now the crew and guests of Pescatora (our summer run about), joined the flotilla to welcome L'Hermione to the Penobscot Bay and into the harbour at Castine.  We had made arrangements to join up at 1 pm. in front of the garage on shore.  At noon, the fog was so thick in Weir Cove, I thought for sure it would be a non-event.  By 12:45, the sun had broken through and it was a go!  In high spirits we set out.

At the head of the Cape, dozens of boats had already gathered, with no big ship in sight.  Well...let's go see some seals on the Green Ledges, other side of Western Island.  Ooooh, Ahhhh. Lots of seals.  Fun.

Back to the head of the Cape.  Now the fog was back and it was an issue.  Hmmmm. 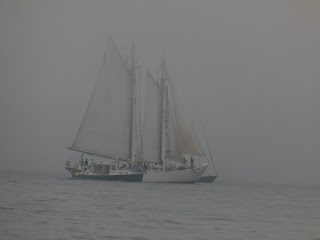 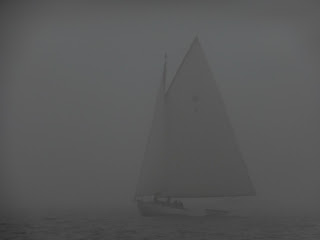 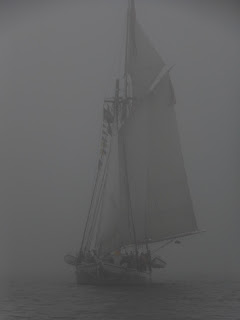 In Parade Dress, this sailboat almost got lost in the fog. 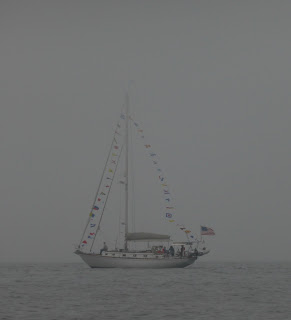 We monitored channel 72 for the local chatter.  No sightings yet.
What was that?  A cannon?
Yes!
Boom!!!
Well, THAT was a cannon, and close by!

We inched forward in the fog.  A ghost emerged from the mist.
There She Is!!! 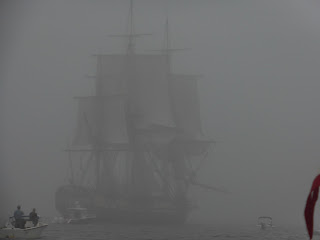 She had sailed right passed us in the fog.

Now everyone converged to get a close up view.  Things got a little dicey as wake crashed into wake, sailing vessels encroached on smaller boats, power boats swerved into and out of the way of other boats...close quarters for sure. 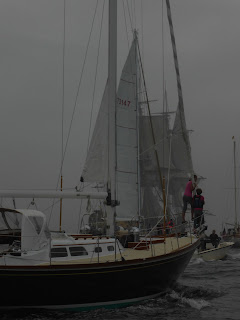 The fog began to lift.  We got a clearer view of the majestic  tall ship.  She towered over everything else on the water.

We could see crew climbing the rigging, doing something with the cannons, and generally looking very authentic in period dress. 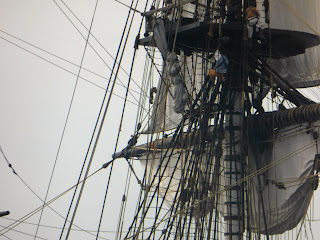 See the man in red on the cross beam in the lower left of this photo?  Doesn't that give you  sense of perspective? 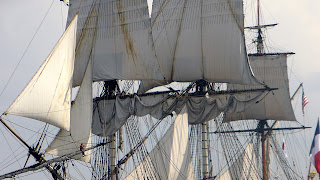 Here a man is at the full 180 feet mast, unfurling a pennant that had fouled in the rigging. 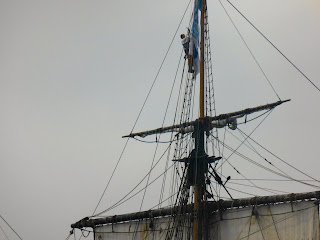 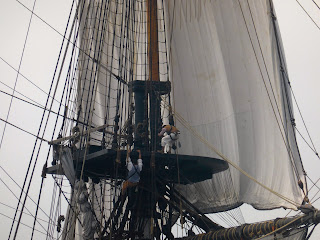 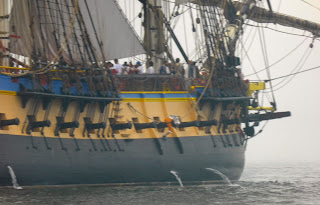 Do you see the man in orange pants hanging over a cannon????? 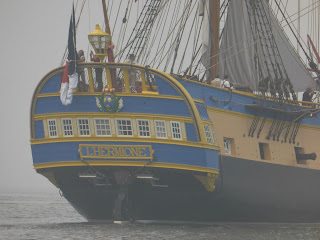 Janice brought fresh baked treats which we devoured hungrily, as we drifted a while and enjoyed the view.
It was fun to be part of it all. 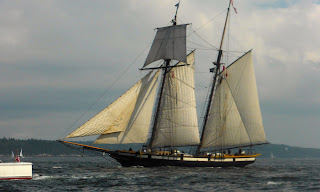 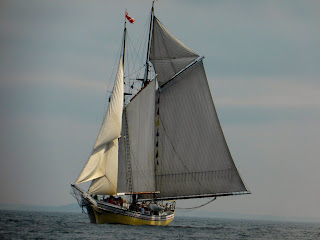 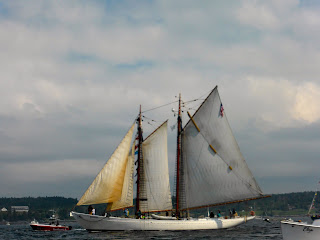 If you click on this picture to enlarge it, you will see the name FOURNIER TRACTOR.  This is a tugboat out of Belfast, probably on hand to maneuver L'Hermione into a birth in Castine.  Fournier was my Mother's maiden name. 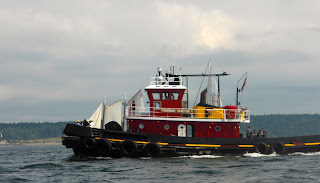 What an adventure we had! 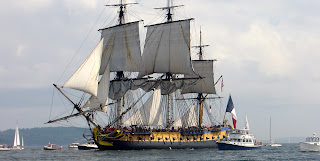 Another great day in Down East Maine.
Stay tuned for more in the series on China.  The tour of the Three Gorges coming up next.