Through the Fog and Mist...

I liked that opening.  It kind of grabs your attention, right?  But before I show you those photos, we need to back up one day and talk about the Yangtze River dam, The Three Gorges Dam.
Credit goes to Mao for setting this project in motion over 40 years ago.  He created the political will, but didn't have the financial means to carry it off.

Today, the Three Gorges Dam is the largest engineering project ever undertaken, anywhere on earth. Opened in 2008, it's 34 generators produce the electricity 25 million tons of crude oil, or 50 million tons of coal can.  Electric production is eight times that of the Hoover Dam in the USA.  That's the good news.

The Bad News outweighs it all!

The project displaced millions of people.

Those displaced were relocated to new land (half of what they had been promised) and given a monetary compensation equivalent to $7.00 a month.  They are not happy campers.

Thousands of significant architectural and archaeological sites were destroyed.

Reports are streaming in of environmental and ecological ramifications that are making Mao roll over in his glass coffin.
(Only at night though, when no one is looking, of course.)

Purported to eliminate flooding downstream, which has been disastrous for centuries, it is now causing the opposite problem upstream:  drought, low water levels, famine and disease.

Built to withstand earthquakes of Seven on the Richter Scale, scientists are warning the Three Gorges Dam has the capacity to CAUSE earthquakes, endangering 31 million people of Changqing right next door.  It is built on, not one, but two geologic fault lines!

The seasonal rising and lowering of the water levels in the 405 square mile reservoir undermines the soil at the base of cliffs, causing landslides of major proportions, resulting in more relocations and many more unhappy people.

-Where did you learn all that, you ask?
-The Scientific American news link.
Oh, by the way, did I mention that Google, Face Book and Twitter are blocked in China?  Just saying....

This group of speakers and guides, are from the Miao people group displaced by the Dam.  They portrayed their grief and dissatisfaction in song and in private discussions with those of us who engaged them in conversation.  They were our hosts on the Three Gorges Excursion. 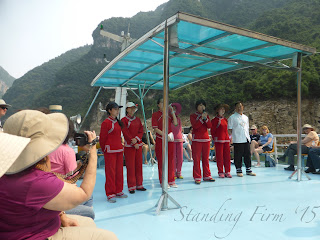 Because of fog and delays on the river, our excursion to the viewing platform of the Dam and Locks was cancelled.  The discrete knock on our door in the early morning alerted us to the upcoming excitement.  Captain B grabbed a coffee and I found something to wear outside and we were ready to document our three hour trip through the five locks.
My photos are on my phone and inaccessible, groan!

Suffice it to say, we were wedged together in the locks so closely, we could have reached out and shaken hands with the crews next to us.  Certainly there were conversations, photo ops and smiles all round.  One lock fed directly into the next, for a total of five, lifting us over 600 feet to the reservoir.

On the other side, the most dramatic scenery bewitched us, calling us deeper and deeper into the fjords of green waters, towering cliffs and verdant peaks. 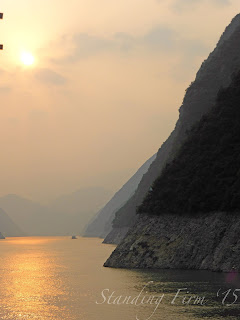 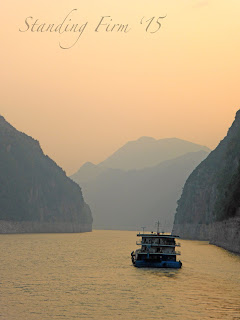 During our excursion, we saw three "Hanging Coffins", relics from centuries past.  When an important official died, his body was buried for three years, while he was revered and honoured.  Once the body had decayed, the bones were exhumed and placed in these wooden coffins, high above ground.  Many thousands of these have been lost due to the flooding. 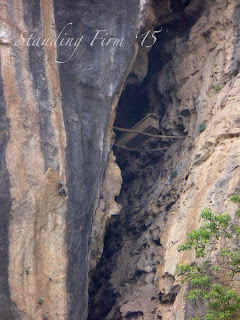 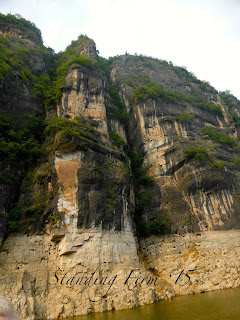 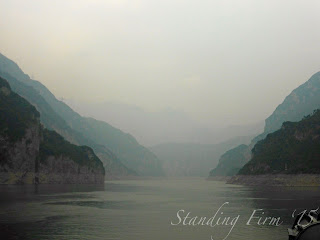 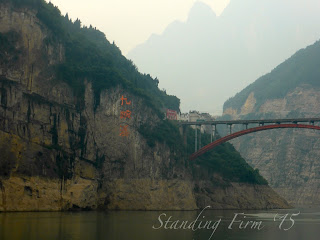 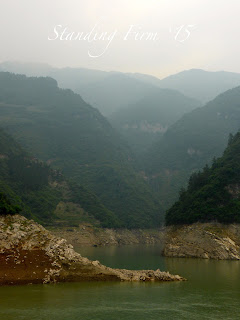 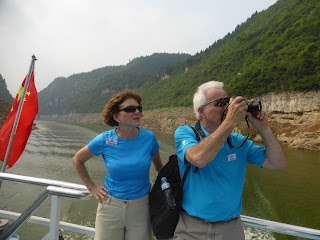 Peter pointed this hat out to me and we shared a smile.  Just HAD to post it.
Steadfast and Loyal. 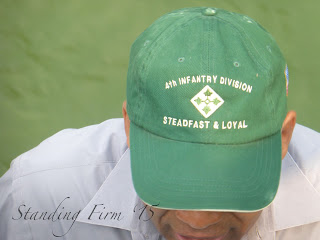 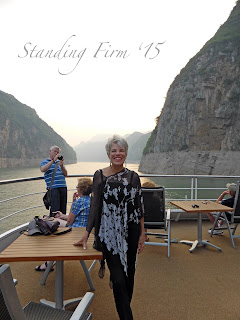 Dressed for another delicious meal aboard and ready to enjoy the company of friendly, happy travellers. The Viking Emerald carries 256 guests and 168 crew.  Large enough to have fun, small enough to meet and get to know new friends.

Next up, farming in China.  Stay tuned.