I have never claimed to be the sharpest pencil in the box when it comes to the techno department.  As a matter of fact, if it weren't for friends and family giving me a leg up every other day, this blog wouldn't even exist.  It's been a huge learning curve and the bad news is, there's no end in sight.  People like Mark Zuckerberg (of Facebook Fame) lay awake nights thinking up ways to confound the few computer skills I have so far mastered.  They keep changing the rules!

When everyone and his dog, all my kids and extended family, finally shamed me into getting my own cell phone to become accessible 24/7, I thought I was pretty hot stuff.  Two years down the road, here I am complaining to the Rogers Rep that my phone charges are escallating out of control.

Hello!  Those silly, little, unsolicited PREMIUM TEXT MESSAGES, telling me to eat healthy breakfasts, avoid potato chips and to snack on fruits have been charging me $5.00 a pop.  Over the past three months alone, I have been indebted a whopping $95.00!!!

The good news is, I have now mastered the vital skill of "stop all".  I have also learned that when you sweetly and firmly refuse to accept, "I'm sorry, I am not authorized to reverse those charges," and that if you patiently persist, the stranger representing the devious scam artists at the end of the line will eventually cave.  I got back 75 of my precious $95.00, or at least the disembodied voice over the phone line assured me a cheque for that amount will arrive in 10 to 14 business days.

Didn't the world used to be a simpler, kinder place back in the day? 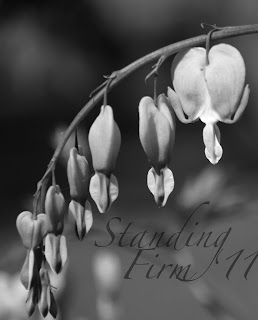 Mrs. Claus at http://likechristmaseveryday.com/ has this cool meme going.  It's fun to see things purely from the point of form and light, not getting distracted by colours.
Are you into photography?  Want to play?

-So what was all that noise on the phone on Saturday, she asked?
-Noise?
-Yeah, you were shouting at me not to send the fire trucks.  I was hearing all kinds of noise, alarms, shouting...then you hung up on me.
Ah...now it's all coming together.
Saturday.
The day of the big dinner party, without a working oven (another story for another day).
Making gourmet nut brittle on the stove top without a candy thermometer.
The gooey mess is boiling almost over the top of the pan and the smoke alarm goes off.
Time to turn on the exhaust fan.
More noise.
The alarm continues unabated.
Open a window, but keep stirring the pot.
The phone.
More noise.


And then the dog set up a blood-chilling howl!
Did I mention I don't hear very well?
I was pretty sure I'd heard the phone.
-Hello?  I'm alright.  Don't send fire trucks.  There is no fire.  I'm just making candy.  Hello?  Is there anybody there?  I'm alright.  Don't worry about the alarm.  No trucks, okay?  Hello?
Dinner went well.  Delicious in fact.
I was the only one who ate any nut brittle and I hadn't even told anyone about almost burning the house down making it.

Man! a week has gone by already.
Here I am having fun with Black and Whites.  Don't you just feel like Ansel Adams? 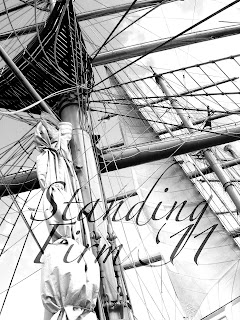 This photo of rigging was taken aboard a Star Clipper Ship, boasting a full compliment of 44 sails.
Come on and join the fun.

War of the Worlds, or How the Vacuum Ate My Dog. 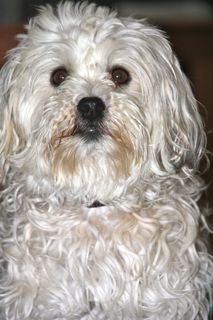 Just a typical day in la-la-land.
One of us cleaning the power head of the vacuum with a seam-ripper, tackling a tangled web of ribbons, threads and string (don't even ask), one of us working the steam iron, both of us distractedly oblivious to Nelson, the wee dog.
As in any hysteria, there was noise--lots and lots of noise:  screaming females, yelping dog, and growling, protesting machinery.  Was there smoke?  Oh yeah, that came later.
The tail was still all there.  Nothing appeared broken.  Quiver, tremble, sigh, breath.  Breath again and keep on breathing, shushing, crying, and patting backs of humans and canine alike.  It was over.... 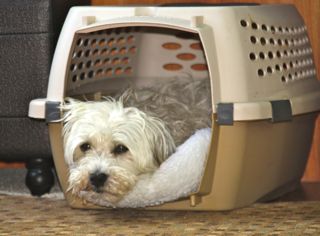 Last winter, when we invited Dennis and Gale for dinner aboard Steadfast, they offered to bring homemade pasta.
-Where did you get homemade pasta here in the Exumas, aka: the land of no grocery stores, gourmet or otherwise?
-I make it myself aboard GadAbout, he boasted.
I've been thinking about that night ever since.
When I was a hippie, mother-of-the-earth, back in the day, I have wanted my very own pasta roller.  I borrowed on once for a week.  I made every conceivable type of coloured pasta over three days:  carrot, spinach, beet, you name it.  Those machines were expensive and I was inpecunious in those days.  I seem to recall the number 250.....  The years have passed, I have saved my shekles and prices have come down to completely reasonable.
Hurrah, I got one! 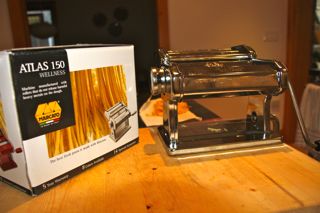 The first time I got ready to make pasta for supper with my new toy, Hubby gave up waiting and made the ready-made store-bought kind instead.  I used the gourmet, authentic recipe from the expensive book I bought with the machine.  D R Y doesn't come close to describing the dough and the exhaustive labour involved in working this stuff.  Another learning curve ball came when I used the super-small cutting rollers.  Boy! was that stuff skinny, breakable, weird.
Today, I used the easy, Non-Italian, easy, softer, super-easy recipe with half soft flour and half duram semolina and eggs.  A much more pliable dough and lots of fun to roll out and cut. 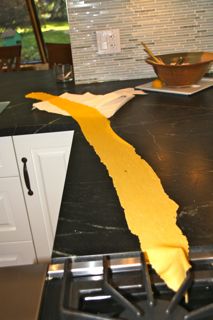 Did I mention one needs super long arms and several extra hands to position, gather, hold and spread out the pasta as it rolls out longer and longer and L O N G E R????? 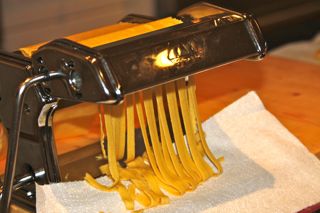 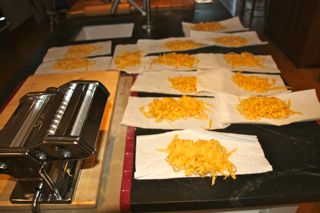 No, not meatballs, not pesto, not Alfredo.  Tonight we are using up last night's leftover steak in a veggie stir fry.  Pasta goes with anything, right? 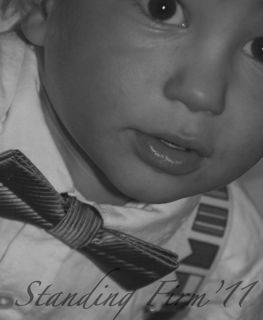 Mrs. Claus at "Like Christmas Every Day" has started a new meme that appeals to me.
title="B&W Wednesdays" href="http://likechristmaseveryday.com/search/label/black%20and%20white%20wednesday" target="_blank">

I don't know about you, but I'm a sucker for new cookbooks with colour pictures--I get right into it (until the novelty wears off).  This week, the Autumn edition of "Food and Drink--The Art of Entertaining" was put out by the Liquor Control Board of Ontario.
Evidently, during the first and second World Wars, people on both sides of the Pond got in the habit of not eating meat on Mondays to conserve meat rations.  These days, people are coming around to the idea that less red meat makes us and our planet healthier.  To that end, they gave us several meatless recipes that caught my attention.
Eggplant Tortino!
Hmmm....sounds nutritious.  Eggplant and Swiss Chard--extremely nutritious.  Then we get to the three kinds of cheese, whipped cream and eggs.  Now it's starting to sound too good.  Sonny Boy wouldn't touch it with a ten foot pole.  He said-
"heart attack on a plate"
but I'm thinking the no-meat part and the "nutritious" part were what gave him pause.
I'll show you the pictures and you can judge for yourselves.  Let me know:  do you really think this meal was healthier than meat and potatoes?  Don't forget that with meat, I would have been serving red, not white wine.  (Red wine is really good for you, or so they say.) 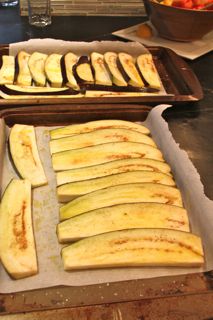 First I baked the eggplant to softened.
Then, I steamed the Swiss Chard with spices, added cream and first cheese.
The next step was layering eggplant, swiss chard/cheese and second cheese for three layers in a spring-form pan.  Finally, the whole pie got drenched in egg mixture and topped with grated parmesan.
Into a hot oven for half an hour,
and voila! 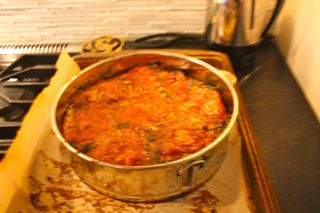 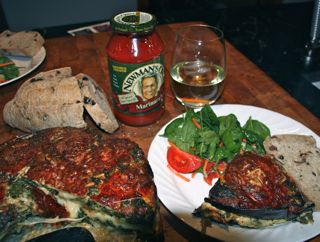 Yes, I confess...I got sidetracked reading your lovely blog posts and left it too long in that very hot oven. Not burned, just more flavour!

Okay, so we put up with the detours around flooding, rattling, flexing windows and bouncing chairs compliments of Irene.  Granted, we were in a poorly constructed tower with a rotten wood exterior, and the monster had been down-graded to Tropical Storm by the time it got to us in Maine,  but still.  Now we are watching Lee and next-in-line, Katia.

It's time for some perspective, a long view, a reminder that Mother Nature doesn't necessarily have it in for you and I specifically.  Here are some storm facts, fresh from the Mariner's Book of Days, by Peter H. Spectre.


*  On average, five hurricanes, two in the major category, hit the United States every three years.

*  The busiest hurricane season so far, was 1995, with 11 in the Atlantic Ocean and 7 making landfall in the US.

*  Typically, the month of the most hurricanes is September, with August a close second.

*  The one that rang up the biggest dollar value was Andrew, a category 5 hurricane, which hit Florida in 1992, with 156mph wind.  Estimated damage costs were more than $26 BILLION.

*  The all-time most intense US hurricane struck the Florida Keys in 1935, with winds of over 190mph.

I experienced scary 60-70 mph wind gusts in tropical storm Irene.  That was nice.  When/if I hear of a TRUE HURRICANE coming my way, all you'll see of me is the dust off my heels as I rush madly for high, in-land ground, in a storm cellar!
What are you facing right now?
What did Irene do to you and yours last week?
Do you have emergency plans in place for when/if?????

I have noticed that life on boats is similar to life at the cottage in at least five main ways:
water, toilets, showers, beds and food.
On the boat, we make our own water and have limited storage for what we make.  Therefore, conservation is a significantly big deal.  At the cottage, we bring in bottled water, making us ever aware of it's precious supply.  The limited source of water on the boat and at the cottage has direct relation to the use of showers and toilets.  In each case, water pressure is affected as well as the amount available for use.  Sailor showers use one cup of water and/or last one minute.  How delightful it is to come home to stand under the Niagara Falls of an urban shower every morning!
The septic tank at the cottage and the macerator unit on the boat both have an aversion to toilet paper.  The old adage, "If you haven't eaten it first, don't put it in the toilet", gives people pause.  The very first thing I relish on coming home from the land of water-soluble, see-thru toilet paper, is the luxury of thick, absorbent, soft, toilet tissue.
There are no king-size beds with pillow-top mattresses when I leave home.  There is no escape from the bounce of Hubby's flip-flop restlessness, no respite from an elbow in the eye or battery from flailing limbs when we are confined to a double mattress butted against a wall.  Returning home means
S L E E P.
Grocery stores are so far away as to be considered non-existent when we anchor at sea or get to the ends of the earth in Down East Maine.  Food is simpler and usually garnered fresh from the water or fields where we find ourselves.  What a treat to hop in the car and carry home gourmet yummies at any time of any day at home.
Funny how the simple things we take for granted at home can actually be luxuries to treasure in other circumstances.
I love being away.
I LOVE COMING HOME!