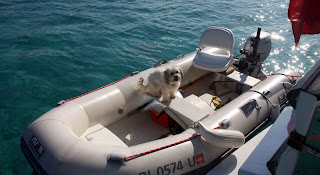 Admiral Lord Nelson Grisly Nickerson is an 18 month old Havanese, born in Rhode Island, immigrated to Canada, took up residence in Ontario and is now learning to be a boat dog, as per his name sake. 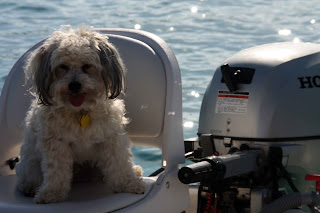 He takes his responsibilities seriously.  Here he is learning to drive the dingy.  This is after learning how to jump into and out of it on  his own.  He is currently working on sitting in his own appointed seat and not digging his claws for purchase into some person's lap 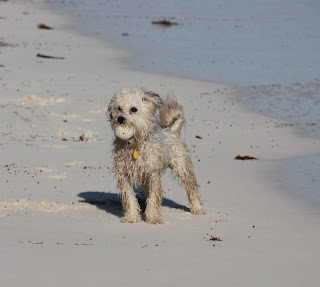 For the first 14 months of his life, Nelson has been a remarkable "receiver", not a "retriever".  His game has been to chase the ball and then play "puppy keep away" guarding it from one and all.  He often will dig holes for it in the sand and pretend to bury it, but then he simply can not leave it there.  Lately, he has begun to see the fun in retrieving and having the ball thrown again and again and again and again and.....oh give up already. 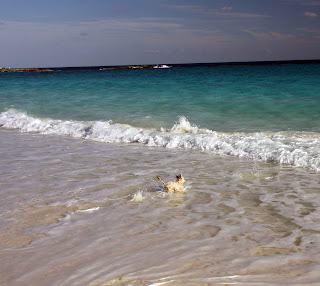 Jumping into the waves takes bravery that is not part of the original equipment most puppies come with.  It has taken some time to learn that one can get wet and live, that waves come and go, and that salt water will taste just as salty at this end of the beach as it does at the other end.  Here we see our hero racing madly in, 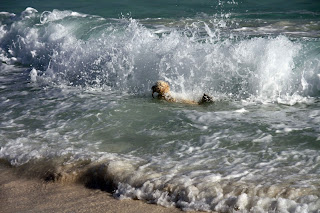 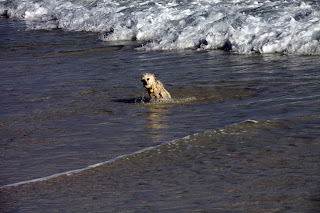 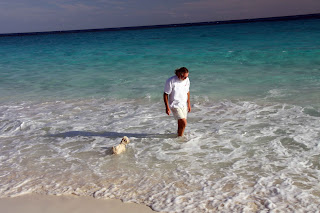 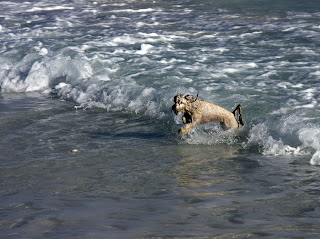 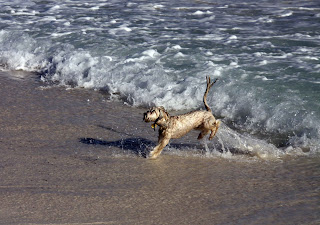 A wave up  the but makes his tail stand up.  He looks so funny, but somehow I don't think he was amused. 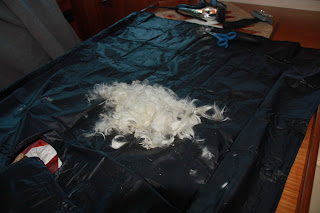 All the salt and sand, the burrs from the spiky grasses,  not to mention his coat's tendancy to mat, makes for frequent (should be daily), uncomfortable grooming sessions.  We are all getting better at it lately:  Buz at holding the head/teeth away from my hands, me at starting with the slicker and moving gradually to the comb and Nelson at putting up with it for minutes longer day by day.  I guess he is growing up and getting used to what it takes to live the happy-go-lucky life of a sailing dog.   My hairdresser at home laughs histerically and calls me a "wannabe".  When there is no one else who will let me at them with a pair of scissors, there's always the long-haired pouch.  It's amazing how quickly it grows back, how trusting the sweetheart is to let me near him with sharp instruments and how forgiving his pure heart is when I leave  him uneven and raggedy.

Would you do that to your dog?

Would your dog let you?

It was such a nice blog until you went into depth about nelsons torture sessions. Poor boy. Maybe he wants a bob cut. I hear the beetles are coming back in style! Love Niels