Dinner with friends means sharing stories and tales from days gone by.  One thing led to another, and before you know it, we were talking pigeons, again. 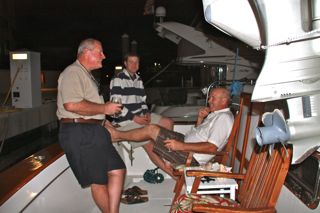 Buddy sheepishly told us the story of his job as a teenager, way back in the day.  Between the ages of 17 and 19, he proudly wielded a broom in the grain mills of Port Dover.  The opportunities for unskilled labour in that booming metropolis were few and far between in the 50’s and 60’s and having to compete with grown men supporting families, Buddy had to take what he could get.  The long chain of command from Farmer, to Harvester, to Trainmen, to Longshoremen, to Crane Operator, to Grain Sweeper--Buddy celebrated the day he landed his vital role in the procession of men and women feeding the world.
On any given day during shipping season, cargo ships maneuvered into Port Dover’s docks to off-load the precious wheat from the Prairie Provinces, ready for milling into cereals and flour.  Vacuums sucked the grain out of the ships’ holds and sent it on its way via conveyor belts to the mills.  It was not always a direct route.  Often, one conveyor belt met another on a different trajectory transporting the grain to its destination.  Not every grain made the transfer successfully.  In fact, so much grain was scattered by jumping from one conveyor belt to another, sweepers were needed to gather up the excess loss and shovel it back into the stream.
Buddy worked his four-hour shifts within the confines of a low ceilinged, 15 foot roundhouse.  He wasn’t alone.  He shared his working space with three other sweeper/shovelers  and  30 to 40 wild pigeons on the take.  The whir of flapping wings, the purring coo-coo-coo, the feathers in his face, all led Buddy into the dark side of man-against-beast.  Coffee break complaining of pigeon-related work hazards led to strategies for revenge.  Out of sheer desperation, Buddy began swinging his broom like a baseball bat at the birds flying up in his face.  The birds were everywhere underfoot and when they startled upwards in close quarters, the low ceilings kept them within arms’ and brooms’ reach.
SWAT.
CRACK.
THUD.
ANOTHER ONE BITES THE DUST!!
Nobody remembers how they came to learn of the elderly, Italian lady who lived along the route Buddy took to home after work each day.  Like an old-time milkman delivering three bottles of milk in each hand, Buddy laced the heads of dead birds thru his fingers.   He shakes his head, turning a definite shade of pink, as he recounts the sparkling-eyed greed of the Senora when she scooped up his proffered birds.
BENISSIMO!
FANTASTICO!
TORTA di PICCIONE!!!
Squab Pie, Pigeon Pie, a delicacy of southern Italy, her native land.  Five dollars for three birds once a week or two kept Buddy and his pals in smokes all thru high school.
Today as he recounts his story, Buddy fears being labeled “Pigeon Killer” or “Profiteer”.
IT WAS A DIFFERENT TIME THEN., he avers. NOBODY THOUGHT ANYTHING OF IT, AND THE OLD LADY LOVED US. 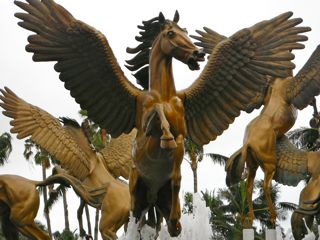 This photo of a Fountain outside "The Reef" Atlantis Resort.
Don't you just love that time around the table when things get relaxed and the stories begin to unfold?

I love hearing stories from differnet people! I love listening to stories of my parents growing up.

So great. I love listening to stories from folks who've traveled the world. It's so interesting.

Love these kinds of stories.

And honestly? Waste not, want not.

Great story and there is nothing wrong with Pigeon pie (although I don't think I'd like it ). I too love the stories told between good friends over a bottle or two of wine.

Have a happy Tuesday and Valentine's Day!

This is so interesting, Rosemary!!

I didn't like the story until I read that they didn't go to waste! Good story!