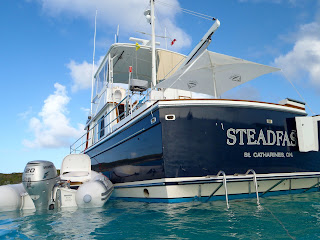 The sun was high in the sky, the wind coming briskly at 20 knots from the south-east.  The waves had been building all morning and now were cresting at four to five feet off his stern.
Twenty miles from land in any direction, John had had enough of the waves pushing him around.  Time to haul in the jib and reef the main.  Time to get things back under his control and out of the merciless hands of Mother Nature.
Hand over hand, he worked his way forward thru the shrouds until he was positioned at the foot of the jib.  The auto helm had the boat moving at a steady six knots without him there to think about it.  You had to admire technology that left his hands free for the task at hand.  The auto-helm was his first mate in all but flesh and blood.
His feet planted in the wide stance of sailors at sea, he leaned his hip into the spinnaker boom notched in its cradle across the bow.  Reefing the jib with both hands, he had nothing but the tread of his speery topsiders left to keep a secure hold as he worked.
The rogue wave caught him unawares as it hit his 40 foot sloop broadside.  The boom taking all his weight suddenly popped out of its nesting spot and swung out of the cradle, sending him flying over the safety rail.
-I’m dead, he thought!  This is it!!
Miraculously, he still held the jib sheet in his hand.  His fist around the rope was his one chance at life, his only chance.
-I’m dead for sure, his brain screamed inside his head!
The speed of the boat and the force of the water slew his body to the length of the free rope, bashing him alongside his boat at mid-ships.  He was holding on to the sheet with both hands now, getting bruised and tired quickly.
-Haven’t spotted a boat all day.  There’s no one to help… no one to see…no one will know….
At the water line, he looked up at the deck of the boat five feet above him.  His eyes burning in the salt water, his mouth a grim line of determination, he stretched as far as an arm could go.   Impossible.   He’d never reach it in a hundred years.
His hands had rubbed raw and his fingers had stiffened to clubs of stubborn wood.  The sheet was now clenched in the crook of his right arm, tight against the bitter end, knotted to prevent it running through the chock inadvertently.  Who knew that knot was to prevent the rope from running out at the end of his elbow in this emergency?
Another wave.  This time the boat keeled over to starboard and the freeboard was lower to the water and closer to John floundering at her side.  No conscious thought moved him—it was the instinctual drive for survival that had his leg flailing up towards the decking of the boat.  Just as the boat righted, moving the deck upwards once more, John’s heel caught on a stanchion.
All his years sailing solo in the islands had toughened his body and strengthened his mind.  Fighting back from three double knee transplants had taught him the quickest way thru any pain was to swallow the bitter pill and keep moving.
-Keep going.  Keep trying.  Keep on keeping on, he encouraged himself.
Little by little, first his heel, then his foot, eventually his knee had purchase against the stanchion.  It took him almost ten minutes to work the weight of his body back aboard the wind-driven boat.
-I’M ALIVE!!  I’M ALIVE!!!!!
Two weeks later, at Sundowners in Big Major’s Spot, he swaggered ashore to share his tale with those gathered around the bonfire.
-I’ve been re-incarnated.  This is me, a new man.
He showed the proof of his tale, a hematoma the size of a large grapefruit on the inside of his leg, just above his knee.
-It’s been awhile now, but I’m sure it will go down eventually, he said.
Those around the fire shook their heads and couldn’t help shuddering, a shiver running up their spines.
-Better him than me, they thought as one. 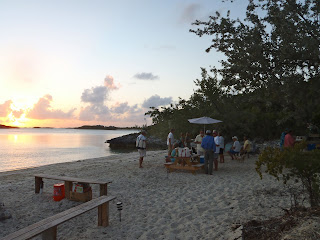 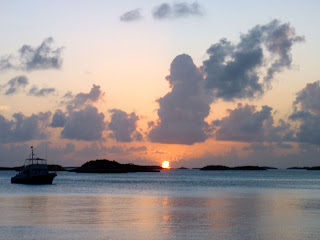 beautiful pictures! i just love that last one! amazing sunset!

Great Blog!! That was amazing. Your thought processing is wonderful. The way you tell the thing is awesome. You are really a master
http://www.stanchionexperts.com

As I read your story. I can feel his strength and how close you came to losing him. Your writing is powerful.

I admire his will to survive. Good story with a happy ending.

Love your story! So when's that book coming up?!!!

Great photos and YIKES, what a scary story!