A long time ago, young Paul’s family lived on Cape Rosier year round.  Nancy was a very little child, whose parents used to bring her to visit her grandmother, a summer resident on the Cape.  During the long, hot days of summer, when parents played bridge, Paul was hired to babysit Nancy, to entertain her, keep her from falling off the rocks, or drowning in the ocean.

As the years passed, Paul became a man with his own lobstering license.  He got bigger boats and more traps as he became more and more successful.  These days, one can find him of an afternoon, lounging in his lobster shack, spinning tales of days gone by.  He reports that Nancy was a ball of fire, quite a handful and hard to keep tabs on. 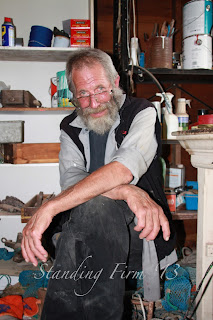 Nancy grew up away from the Cape.  She is the founder and driving force of Susquehana Service Dogs.  Today, she has four children of her own and is reveling in Grandchildren.   From time to time, she manages a short visit here to tramp the hiking trails of Holbrook Sanctuary, pick wild blueberries and visit Blake’s Camp.

How much fun it is to see history coming full circle, 60 years latter.

9 years old Percy, whose family has been living on the Cape since time began—yes, that long—lives just a hop, skip and a jump down the road from Paul’s house.  They are not-too-distantly related.  As young as he is, he is apprenticing to be a lobster fisherman with his Uncle Sparky.  If he logs enough hours, he can apply for his own 10 traps at age 12, more when he’s 15, then 25 and on up as he gets older.  His uncle has over 300 traps and supports his family with the long hours and heavy work as a full-time lobster man.  Up at 4:30 am and on the water by 5, he puts in long days, setting and pulling his traps with Percy at his side.

Noldi is 3 and a half years old, and comes to visit his Grandma in the same log cabin on the Cape that Nancy did so many summers ago.  On odd days when Percy isn’t working with his uncle, he comes to play with Noldi, entertaining him on bikes, kayaking off the beach, building complicated toys and playing in the sandbox.  Those of us watching, think Percy has more in him than fishing.  His ingenious inventions and sweet personality can take him anywhere his imagination can go.  At three years old, Noldi only looks as far into the future as dessert time at dinner.  He is very bright and his parents are building a college fund.

Click to enlarge these photos so you don't miss the cute details, like the trailing caterpillar toy and  Nelson in the wagon. 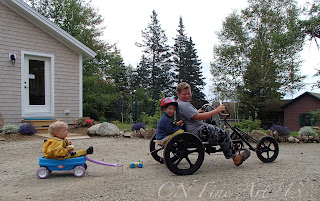 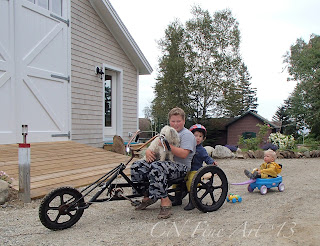 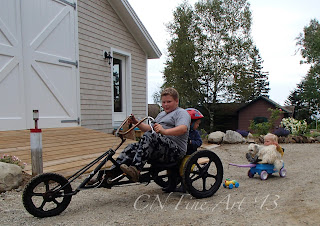 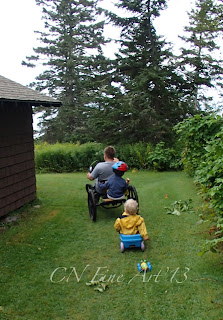 I wonder what story history will write for this generation of youngsters on the Cape?  I wonder if in another 60 years, other Maine Lobstermen-to-be will entertain future generations of our family during summers on the Cape?  This is the place where time stands still, and the same stories are played out over and over again, like in a dream.