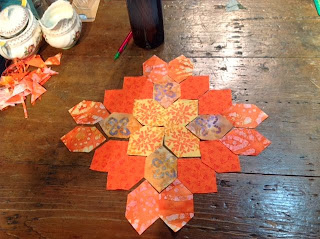 I am different.  Sure...there are others like me, but I was the "different" one in my family.

It started, and was encouraged, when I began walking and talking as a precocious toddler, the late-born, blond and bonnie lassie to doting parents.

-Isn't she adorable?
-Doesn't that beat all? Look at her go!
-Come here, Sweetheart...let me bask in the sunshine of your radiance.  (not really, but the message was loud and clear.)

I was a walking, talking, 11 month old, show-stealer everywhere I went--to fashion shows, weddings, even to the local pub, of all places!

But then, things changed--not me, but the world around me.  A baby brother, followed two years later by a baby sister.  My world no longer had time or energy to dote on my antics.  Now it was:
-Rosemary, sit still.
-Rosemary, cant you be quiet for two minutes?
-Rosemary, go in the other room and read a book.

The indifference that now met my vibrant explosions of colour and dance only spurred me on to ever-greater decibels of song and pulsing beats of marching.  There were no inhibiting checks to filter ideas that flew thru my head and immediately out of my mouth.  Curious became nosey. Lively became manic.  Expressive became look-at-me-demanding.  I was a one-person band in every room, every situation.  The "children should be seen and not heard" refrain punctuated every performance, deflating any momentary bubble of focus in my direction.

It is only now, in my 60's, as I watch my grandchildren and their parents interacting, that I am seeing myself this way.  It used to be my opinion that I had always been "different", "creative", "artistic", "spontaneous".  Today's catch-words are "busy", "inattentive", "uninhibited", "loud".

When I chose bright yellows, oranges and batik blues for a quilting square last week, the class leader intuited I was a "moving kind of girl, choosing fabric combos that had lots of movement".