Old Bahama Bay, a long time favourite marina in the West End of Grand Bahama Island, was beautifully rebuilt after its total destruction by hurricane 4 or 5 years ago.  It made for a lovely first stop for Steadfast after crossing the Gulf Stream last Wednesday. 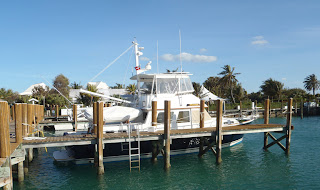 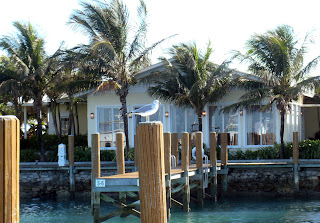 After 4 nights taking refuge from high winds and heavy seas, we decided it was "now or never" to make our move before the next cold front, expected Monday or Tuesday.  Clear skies and mild following seas greeted us as we left OBB Marina in our wake.
The Wahoo, king of the mackerel family, are running, and we were ready. 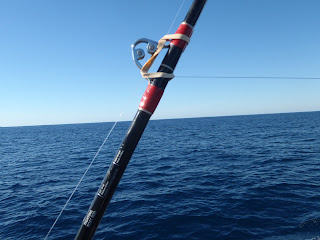 The scream of the reel as a 30 pounder takes the bait gets my heart pounding.  Yeehaw!  Fish!!!
Strike one.
15 minutes later, another strike.  This time, we brought our very first tuna aboard.  (a small one--18 pounds).  My mouth was watering instantly. 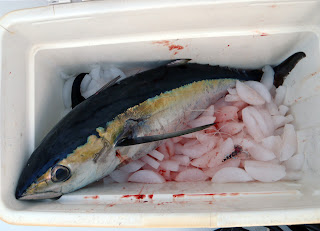 Another strike out, followed by 2 lines attacked simultaneously.  Both Buz and I worked a rod until one had to be put aside in the holder to concentrate on one fish at a time.  Buz muscled a HUGE wahoo right to the edge of the swim platform, where, hear our shouts of frustration, it threw the hook.
Strike three.
Boo hoo.
Now it's my turn.
30 pounds of speeding muscle, bulletting through the water at 60 mph!  What a fight.  THIS is fishing.
Captain Buz and I are an unstopable team.  One is at the helm and one is at the stern, but when it comes time to bring a big boy into the boat, it takes 2 of us.  See me with a thrashing 3-4 foot long fish at the end of a 6 foot steel leader.  There is no way to reel in anymore line and the fish is still 6 feet away from reach.  I hold onto the bucking rod, while Buz valiantly leans over the side of the boat to scoop Mr. Big Fish into an over-sized net.  You have to visualize this one on your own, because there was no one else available to take the picture. 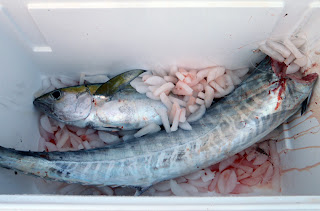 We had to cut off his head so he would fit in our biggest cooler.  Thank goodness for an on board  ice maker .
Two fish in the ice cooler beats three that got away.  Fresh fish for supper and some to share--we are very pleased with ourselves.  This was a very auspicious beginning, leaving us eager for more another day.
Do you eat fish?  Do you like to catch them too?  I'm wondering if all that work used up enough calories to warrant dessert?

Wish i was there to enjoy the feast!

I LOVE fish! the more the better. My wife is Japanese, so we eat a lot of fish. Sashimi or cooked...It's all good! Happy to hear you are doing well and good luck with the rest of your trip. Oh yeah, I'd eat some of that tuna, right off the fish...

I love fish too!! WOW! Fish, fresh off the sea! How cool is that! I was going to have a canned tuna sandwich for breakfast and now it doesn't look appetizing anymore.

Can't wait to hear about the rest of your adventures.

I caught a King Salmon one time on a charter and it was pretty exciting (and tasty!). You got a real winner!

I've never been a fan of the "boring, bug bites, and beer" type of fishing - but this actually sounds fun. And fish that fresh has to be de-lish! (Hard to imagine for us land-locked types in the midwest.) I'm sure that procuring your own meal over-justifies dessert.

Wahoo! I never knew what that meant except that one of my favorite little Mexican food dives is called Wahoo's. Now I know. Looks like you're having a great time.