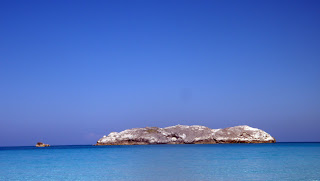 In the years between 1950 and 1968, Tucker Rolle managed Compass Cay for an off-shore owner. A native son of the Bahamas, Tucker took the bounty of the seas for granted. His islands, his waters, his fish, his livelihood.

Toiling through the heat of the days, summer and winter, he fell in with the rythm of nature. He knew when to expect the spring return of the Wahoo and Mahi. He learned the cycles of spawning for grouper and conch. He discovered the secrets of spiny lobsters, finding their hiding holes and natural habitat.

Each evening when work was done, Tucker could be seen nimbly stepping into his skiff. The tourquoise waters of the Sound calmed to smooth wavelettes between the crescent beach and the three rocky out-croppings a stone's throw from shore. Bleached, dead coral above the high water line, they were rich repositories of marine life below. Tuck began referring to the largest, middle breakwall, The Refrigerator, because he always went there to get his supper.

In those days, the Bahamian out-islands were frequented by small numbers of hale and hearty sailors, mostly long-haul cruisers. Sport fishing tournaments for the rich and famous were held in Bimini, in the Abaccos, or Nassau, but the Exumas were largely Family Island backwaters of third world poverty, holding little allure for tourists. Every evening, before the sun's golden orb melted into the sea, Tucker made for his "refrigerator". He could always find fresh food to put on the table. He never came away empty-handed.

In 1978, or there abouts, the American owner of the Cay fell ill, gave up his holdings in the Bahamian Commonwealth and subsequently died. The government deeded a life-lease on Compass Cay to Tucker Rolle. Thus began a radical transformation as Tucker, the new owner, worked to realize his dream of a deep water marina and resort in the idyllic central Exumas.

Many technological advances in yacht design, electronic charting, GPS and auto-piloting, together with a booming North American economy brought more and more visitors, short-term cruisers, tourists and developers into Paradise. What had once been a sure source of seafood has been fished out, stripped bare, left empty. Those in search of lobster, conch or grouper have to foray into deeper waters and use scuba gear (against all regulations) to enjoy the tasty thrill of seafood delicacies for dinners.

Yes, it is still called Refrigerator Rock. Newcomers scratch their heads as they try in vain to see how it could resemble a fridge at home. It is nothing more than ragged, lifeless rock, above and below the waterline.

ps.  This is a piece I wrote for the writing course I am doing with Oh The Stories You Will Tell.  Natacha, of Creative Nachos, is our wonderful, inspiring teacher.  She liked this story and I hope you will too.
Posted by Unknown at 5:33 PM

a history lesson! i was wondering where the refrigerator was. lol

I was scratching my head too, wondering where the refrigerator was!!

Have a nice day!

Great story and very nice writing!
Nature does provide us with a nice pantry. It's up to us not to empty it!

You are sharing all the work I LOVED...this was one of the best pieces...but truly there were so many